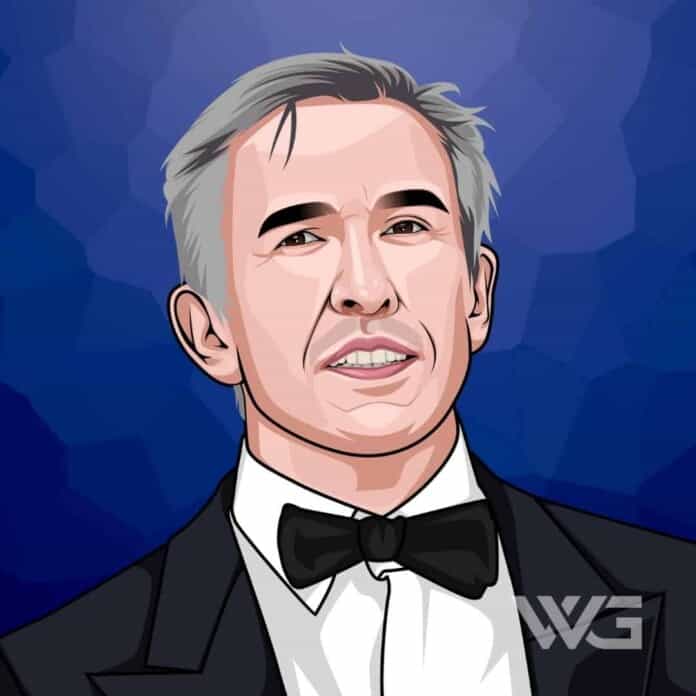 What is Steve Coogan’s net worth?

Steve Coogan is an English actor, comedian, and producer from Lancashire.

Coogan began his career in the 1980s, working as a voice artist on the satirical puppet show Spitting Image and providing voiceovers for television advertisements. In the early 1990s, he began creating original comic characters.

Stephen John Coogan was born on the 14th of October, 1965, in Middleton, Lancashire. He is one of six children born to Anthony Coogan, an IBM engineer, and Kathleen, a housewife. During the 1950s, his paternal grandfather established a dance hall for Irish immigrants.

He attended Cardinal Langley Roman Catholic High School. He has stated that he had a happy childhood, and in addition to having four brothers and one sister, his parents fostered children on a short-term basis.

Coogan began his career as a comic and impressionist, performing regularly in Ipswich, before working as a voice artist for television advertisements and the satirical puppet show ‘Spitting Image’.

In 2010, he reunited with actor Rob Brydon and director Michael Winterbottom (both of whom he had worked with on the 2002 film ’24 Hour Party People’ and 2006’s ‘A Cock and Bull Story’, for the partially improvised BBC2 sitcom ‘The Trip’.

He has played himself several times on screen. First, in one of the vignettes of Jim Jarmusch’s 2003 film Coffee and Cigarettes, alongside Alfred Molina.

Second, in 2006 Coogan starred with Rob Brydon in Michael Winterbottom’s A Cock and Bull Story, a self-referential film of the “unfilmable” self-referential novel Tristram Shandy by Laurence Sterne.

Coogan’s most acclaimed work to date is the drama-comedy ‘Philomena’, which he co-wrote, produced, and starred in with Judi Dench.

This performance earned him a Golden Globe nomination, among many other nominations (and some wins). Philomena was nominated for the Academy Award for Best Picture.

Here are some of the best highlights of Steve Coogan’s career:

“Look at all those American preachers who got caught with their pants down. They say one thing and they are doing another. I try to be more honest about it, both in my thinking and my behavior.” – Steve Coogan

“I don’t apologize for my behavior anymore. Whatever I do or don’t do shouldn’t matter. Moral certainty is dangerous. Moral certainty is what makes people go to war unnecessarily and illegally. Morality, as any halfway intelligent human being would tell you, is a very subjective thing.” – Steve Coogan

“It’s like aversion therapy. You keep doing scenes over and over again with three women in the bed with you, and we had to do them all in one week. Three girls would step out and another three girls would step into the bed. It sounds like a fantasy but by the end of it, I just wanted to go for a hike on my own in the north of England, in the hills. Because it became a sort of “be careful what you wish for” kinda thing.” – Steve Coogan

“There were days when we used to say, what was in today’s paper is tomorrow’s fish-and-chip paper. When I became successful, I enjoyed myself a little.” – Steve Coogan

“When it comes to morality, I’d rather have an unfaithful president like Bill Clinton, who tried to reform welfare, than a faithful George Bush who propagated an illegal war on the rest of the world. So that is where my morality stands.” – Steve Coogan

Now that you know all about Steve Coogan’s net worth, and how he achieved success; let’s take a look at some of the lessons we can learn from him:

Time is an illusion. It is a limitation created by our minds. If we stop measuring everything and just enjoy every moment given, life is going to be a lot more exciting.

True enlightenment arrives the moment you understand the difference between your wants and your needs. When you awaken to this understanding, you will realize that life has always been providing for you, caring for you, giving you all that you need.

the decisions you make are your decisions. And without checking in with yourself and what you want or need, you’ll find that you start doing your work and living your life for everyone but yourself.

How much is Steve Coogan worth?

Steve Coogan’s net worth is estimated to be $25 Million.

How old is Steve Coogan?

How tall is Steve Coogan?

Steve Coogan is an English actor, farceur, writer, impressionist, and producer who earned his net worth through his writing, producing, and acting in film and TV.

His breakthrough came with the voice work on the long-running puppet show, Spitting Image, which was a weekly satirical review that took aim at Margaret Thatcher, Michael Jackson, and Ronald Reagan, among others.

As of December 2022, Steve Coogan’s net worth is estimated to be $25 Million.

What do you think about Steve Coogan’s net worth? Leave a comment below.