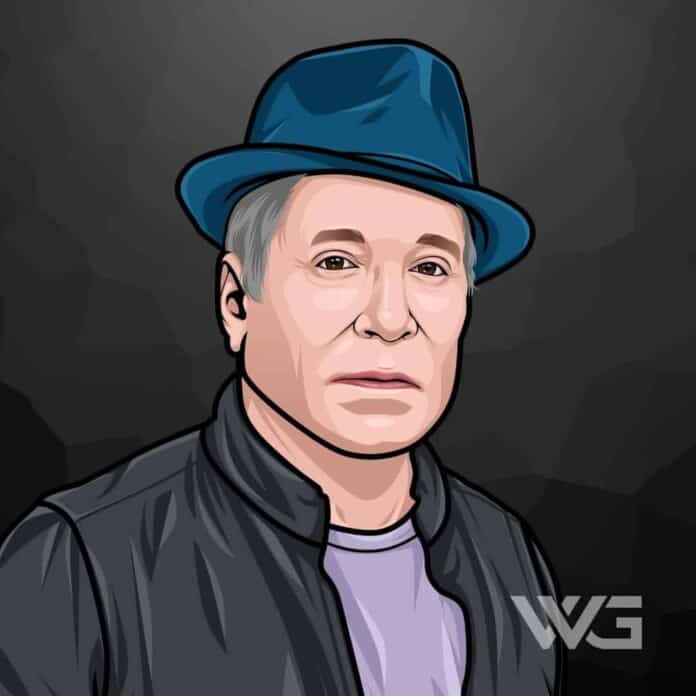 What is Paul Simon’s net worth?

Paul Simon is an American musician, singer, and actor.

Simon’s musical career has spanned over six decades. He is widely regarded as one of the best songwriters in popular music history. He formed the duo, Simon & Garfunkel, with his school friend Art Garfunkel in 1956.

They released five studio albums and became one of the most acclaimed groups of the 1960s.

Simon was born to Hungarian-Jewish parents. His father was a college professor, and his mother was an elementary school teacher. In 1945, his family moved to the Kew Gardens Hills section of Flushing, Queens, in New York City.

The musician Donald Fagen described Simon’s childhood as that of “a certain kind of New York Jew, almost a stereotype, really, to whom music and baseball are essential.

After performing and writing solo material while in college, he and Art signed a deal with Columbia Records in 1964 when they also started going by Simon & Garfunkel rather than Tom & Jerry.

Their first LP, ‘Wednesday 3 A.M.’, was not initially successful upon its release in October of 1964.

They released four more albums together ‘Sounds of Silence; Parsley,’ ‘Sage,’ ‘Rosemary,’ and ‘Thyme; Bookends; and Bridge over Troubled Water.’ Simon & Garfunkel were inducted into the Rock and Roll Hall of Fame in 1990and they received a Grammy Lifetime Achievement Award in 2003.

After the split of Simon & Garfunkel in 1970, Simon focused on his solo projects. He released a self-titled album in 1972 after releasing the hit single ‘Mother and Child Reunion.’

In 1990, he followed up by releasing ‘The Rhythm of the Saints,’ primarily recorded in Rio de Janeiro, which was also very favorably reviewed.

He then organized a concert in Central Park with African and South American Bands. The concert was wildly successful, drawing a crowd of over 750,000, making it one of the largest concert audiences in history.

His popularity dropped over the next few years, but he has continued to remain successful, frequently releasing new music and touring extensively worldwide. He has appeared on Saturday Night Live 14 times, won 12 Grammy Awards, two Brit Awards.

How Does Paul Simon Spend His Money?

Paul Simon spends some of his money on charity work.

Here are some of the best highlights of Paul Simon’s career:

“Kodachrome, it gives us those nice bright colors Gives us the greens of summers Makes you think all the world’s a sunny day, oh yeah! I got a Nikon camera, I love to take a photograph So momma, don’t take my Kodachrome away…” – Paul Simon

“If you can get humor and seriousness at the same time, you’ve created a special little thing, and that’s what I’m looking for, because if you get pompous, you lose everything.” – Paul Simon

“I don’t feel any pressure from fans. But I’m always in some kind of state of emotional turmoil. I would not describe myself as happy-go-lucky. That’s not to say that I’m not happy.” – Paul Simon

“I really don’t know what exactly all the songs mean. Sometimes other people have meanings and when I hear them I think, ‘That’s really a better meaning than I thought, and perfectly valid, given the words that exist.’ So part of what makes a song really good is that people take in different meanings, and they apply them, and they might be more powerful than the ones I’m thinking.” – Paul Simon

Now that you know all about Paul Simon’s net worth and how he achieved success; let’s take a look at some of the lessons we can learn from him:

The words of the prophets are written on the subway walls and tenements halls and whispered in the sounds of silence.

All lies and jests, still a man hears what he wants to hear and disregards the rest.

Music should grow and mature with you, following you right on up until you die.

How much is Paul Simon worth?

Paul Simon’s net worth is estimated to be $200 Million.

How old is Paul Simon?

How tall is Paul Simon?

Paul Simon is an American singer and songwriter.

Simon’s career has spanned many years, and he has met with both critical and popular success. Simon has been successful both as a solo artist and in collaboration with Art Garfunkel, with whom he formed the duo, Simon & Garfunkel.

What do you think about Paul Simon’s net worth? Leave a comment below.