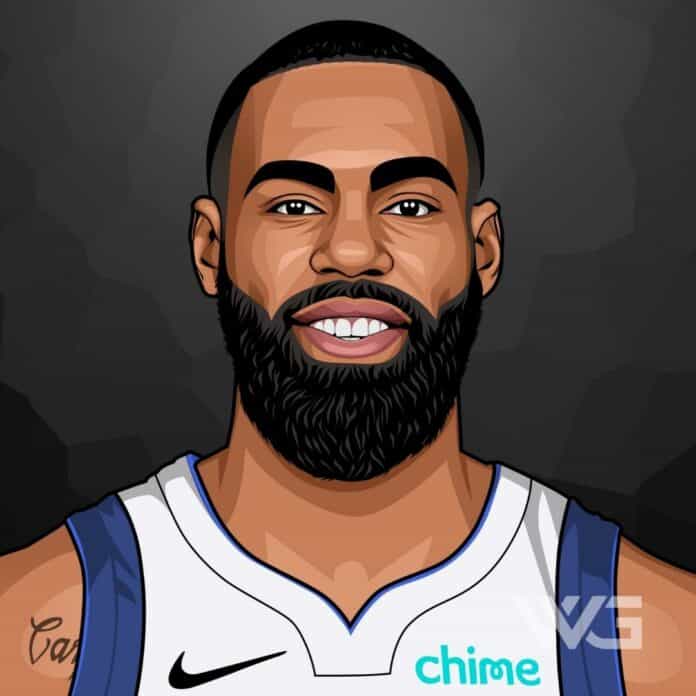 What is Tim Hardaway Jr’s net worth?

Originally drafted by the New York Knicks in 2013, Hardaway has since gone on to become one of the most valuable players in the industry.

While he has been playing for a while, he has no plans to retire anytime soon, and we expect to see him on the court for many more seasons to come.

Timothy Duane Hardaway Jr was born March 16, 1992, in Alameda, California, to Yolanda and Tim Hardaway. At the time of his birth, his father was a professional basketball player for the Golden State Warriors.

Tim graduated from Miami Palmetto High School, and he played football as a freshman before focusing on basketball.

Coming out of high school, he was ranked as a three-star recruit by ESPN, who also named him the 93rd-best player and the 28th-best shooting guard in 2010.

He committed to the University of Michigan in 2010, and the same year he was named the co-freshman of the week alongside Jared Sullinger.

Hardaway played with the Michigan Wolverines until 2013 and, during that time, was named to the National Basketball Coaches Division I All-District 7 first team. He was also one of only 60 players to be invited to the NBA draft combine.

Tim Hardaway Jr was selected by the New York Knicks as their 24th overall pick in the 2013 NBA draft, and he joined his father as a first-round selection.

He made his regular-season debut with the Knicks in October, earning five points against Milwaukee. During his rookie season, he was also named a Rising Stars participant at the 2014 NBA All-Star Game weekend.

Hardaway played with the Knicks until 2015, when he was traded to the Atlanta Hawks, who later assigned him to the Canton Charge, a D-League affiliate of the Cleveland Cavaliers.

The same year, using the flexible assignment rule, he was moved to the San Antonio Spurs. However, in 2016 he was able to play his first game officially for the Hawks, earning three points in his first 12 minutes off the bench.

In 2017, he returned to the New York Knicks, receiving a four-year contract offer for $71 million that the Atlanta Hawks couldn’t match in order to keep him.

Hardaway played for the Knicks until 2021 when he was traded to the Dallas Mavericks, who he remains with today.

As a member of the Mavericks, Hardaway averaged 15 points in 19 games during his first season with them and finished the year with a career-high 204 three-pointers made.

In 2020, he opted to stay with the Mavericks and re-signed with them again in 2021. Although in 2022, he was ruled out indefinitely after undergoing surgery on his left foot.

Tim Hardaway Jr may not be as wealthy as Kevin Garnett or Dirk Nowitzki, but he has still earned a substantial amount thanks to his skills.

His overall salary has increased drastically since he first began his career, and it is likely we will see him continue to earn even more as he remains in the NBA.

He may be a ways away from being one of the richest NBA players in the world, but Tim Hardaway Jr has still managed to earn an impressive salary as a professional basketball player.

As his career progresses, we definitely expect to see his salary continue to increase, and it is possible he may become one of the highest-paid players on the court.

Despite his exceptional career and being the son of a fairly prestigious former NBA player, little is known about Tim Hardaway Jr’s personal life.

However, he is active on his official Instagram account, where he posts promotional pictures and photos from his games. He can also be found on his official Twitter account, which he uses to interact with fans and talk about his career.

You can also check out Hardaway Jr’s official NBA page, which lists all relevant breaking news about him, as well as his latest stats.

If any information about his personal life is made public, we will be sure to keep you updated. So, make sure to check back often!

Like Christian Wood and Saddiq Bey, Tim Hardaway Jr has achieved much during his career that has earned him recognition.

We’ve chosen to highlight some of the most prestigious accolades and honors that have been given to him since the start of his career.

Here are some of Tim Hardaway Jr’s greatest career awards and achievements:

He may not be as decorated as Chris Bosh or Kyrie Irving, but Hardaway Jr has certainly earned many impressive awards and honors.

As he continues his career, it is likely that we will see him earn even more impressive distinctions for his talents.

How Does Tim Hardaway Jr Spend His Money?

Tim Hardaway Jr bought a home in one of the most expensive cities in the US, Miami Beach, in 2022 for $9.15 million.

The downstairs is entirely open and comes with a huge chef’s kitchen and living area that overlooks the vibrant pool deck.

Upstairs, there are four large bedrooms, including a master bedroom that takes up one full side of the house. There is also a giant walk-in closet where you can store the most expensive sneakers ever made alongside the most expensive Gucci items ever sold, with ample space left over for other designer luxuries.

Outside, there are two pools, multiple covered porches, and an outdoor kitchen that is built into the sitting area.

Tim Hardaway Jr has done much during his time in the NBA, and many moments from his career stand out from the rest.

We’ve chosen to highlight Hardaway’s most impressive milestones, particularly the ones that have helped him become successful.

Here are some of the best highlights of Tim Hardaway Jr’s career:

While these are only a few of his most important milestones, they are the ones that have stood out during his career.

It is very likely we will see him achieve much more as his career progresses, which will further allow him to stand out on the court.

Tim Hardaway Jr has learned a lot during his career as a professional basketball player, and he constantly pushes himself to become better.

Truly dedicated to the sport, Hardaway is willing to do whatever he needs to in order to become one of the best NBA players in the world.

Here are our favorite quotes from Tim Hardaway Jr:

There is a lot that we can learn from Tim Hardaway Jr and his impressive career as a professional basketball player in the NBA.

Now that you know all about Tim Hardaway Jr’s net worth, we can take a closer look at what he can teach us about finding our own success.

Here are some of the best success lessons to learn from Tim Hardaway Jr:

1. Hard Work Is Everything

If you want to become successful, you need to learn how to work and think like a boss so that you can get ahead.

This means you have to learn to be competitive and persistent in your work so that you can produce good results.

Practice is something that everyone needs to do regardless of their skills, and it is one of the best ways to keep yourself sharp.

If you don’t stay on top of your skills, they can quickly stagnate, causing you to fall behind your competition.

To get ahead and get noticed, you have to make sure that the work you deliver is consistently your best.

The worst thing you can do is slack off when you’re trying to become successful because you could get passed over for opportunities much more easily.

Tim Hardaway Jr has become one of the most valuable and popular players in the NBA, and he’s shown no signs of wanting to leave the court anytime soon.

Along with his skills, he has also earned a substantial amount of wealth during his career, and his overall net worth is increasing each season.

Make sure to check back often so you won’t miss any updates on Hardaway Jr’s ongoing career and growing fortune.

What do you think about Tim Hardaway Jr’s net worth? Leave a comment below.