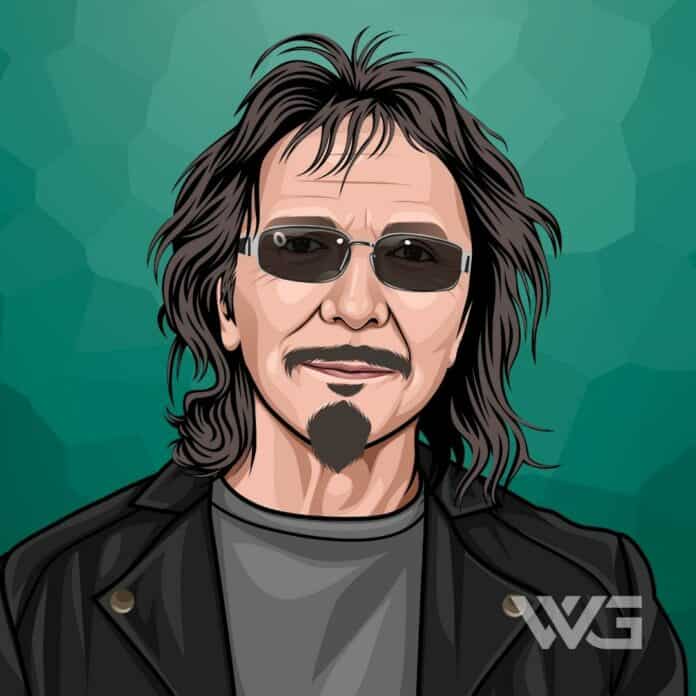 What is Tony Iommi’s net worth?

Tony Iommi is known worldwide for his amazing talents on the guitar and founded a band that would go on to make music history.

Iommi and Black Sabbath redefined rock music and created a new genre of heavy metal that would influence metal bands for many years to come.

His unique style of playing the guitar is responsible for a whole range of new sub-genres of metal music, including death metal, stoner rock, grunge, doom, thrash, and sludge.

Tony’s family was Catholic, but they were not heavily religious. His parents were the proud owners of a shop in England and a vineyard in Italy.

Tony started practicing martial arts at the age of 10 because of constantly being bullied. While still young, he fell when being chased by a bully and cut his lip. He developed the name Scarface and, when he became a teenager, he focused on growing a mustache to hide it.

He discovered a passion for music at a young age and originally focused his efforts on the drums, but to not disturb his parents, he decided to take up the guitar instead.

To make some cash, he started working for a sheet metal factory and, at the age of 17, while working, had an accident that resulted in him losing the tips of some of his fingers on his right hand.

After the accident, he played the guitar with his left hand after fashioning some prosthetic fingers from a Fairy Liquid bottle he’d melted. This was the genesis of his new style of playing, with softer strings and a deeper sound, as it was easier to bend the strings.

He went on to work in many other jobs, such as plumbing, retail, and manufacturing, but this came to an end once his music career took off.

Iommi started off playing in a variety of bands early in his career, one of the most notable being the Rockin’ Chevrolets.

He met up with an old school friend, Ozzy Osbourne and, together with Bill Ward, and Geezer Butler, took on the challenge of launching their new band. Little did they know, that they would become some of the richest rockstars in the world in a few short years.

They named their new band Earth, but within a month, Tony left to play with Jethro Tull. That only lasted a few weeks and he rejoined his band late in 1968.

The band renamed themselves Black Sabbath and, at first, struggled to keep up with the constant changes in the music industry. But once they released “Paranoid” and “Sabbath Bloody Sabbath”, they changed rock music forever by creating a whole new genre of heavy metal.

Black Sabbath had a slight hiccup when Ozzy Osbourne was fired and replaced by Ronni James Dio.

Soon after, the band started losing members one by one and Ozzy was voted out by the rest of the members, saying that if he didn’t leave then they would all leave.

Eventually, Tony decided to go out on his own and released his first solo album in 1986 named “Seventh Star”.

In 2000, Black Sabbath reunited for a tour and released an album called “13”. 2000 was a great year, not just for the band but for Tony’s solo career as well, as he released a new album, “Iommi”.

With all the confusion Black Sabbath was experiencing, Tony founded a new band called Heaven and Hell. The new band included all the members of Black Sabbath except for Ozzy Osbourne.

Heaven and Hell became famous quickly and toured alongside popular bands such as Judas Priest and Megadeth. Unfortunately, the band came to an end when Ronnie James Dio passed away from stomach cancer in 2010.

Tony Iommi introduced a new style of playing guitar and the resulting sound was just what the audiences at the time were looking for.

This resulted in booming record sales and sold-out concerts, earning him an enormous amount of money.

Tony Iommi is the highest-paid guitarist in the world, joining the ranks of such greats as Brian May, David Gilmour, and Mark Knopfler, and despite his age, he’s still in great demand.

On top of that, his solo albums as well as Black Sabbath music and memorabilia continue to sell well, earning him massive royalties.

Iommi has not wasted his money, instead, he’s invested heavily in property, perfumes, restaurants, and his own brand of vodka.

All of these investments have paid off handsomely for this veteran rocker.

Here’s a breakdown of Tony Iommi’s annual net worth:

While it is difficult to obtain an accurate account of just how rich Tony Iommi is, what we do know is that he continues to invest in a variety of businesses, including a football team.

Tony married Susan Snowdon in 1973 but divorced three years later. He has revealed that the failure of his marriage had a lot to do with Black Sabbath’s battles with recording the Technical Ecstasy album.

He married Melinda Diaz, an American model, in 1980 and went on to have a daughter before filing for divorce soon after. In 1986, he met Valery, whom he dated for six years before marrying in 1992.

After that marriage failed too, he finally met Maria Sjöholm. The two had an incredible connection and had a low-key secret wedding in 2005.

Over the years, Tony Iommi has made huge strides in creating a new sound for generations of youngsters looking for something new and different.

Here are some of the more memorable moments from Tony Iommi’s career:

Toni is the inventor of heavy metal, with riffs like War Pigs, and Symptom of the Universe providing hard rock axe jockeys with a blueprint to follow.

How Does Tony Iommi Spend His Money?

Tony has invested a fortune in real estate and sold his six-bedroom home in England for $4.3 million in 2014.

He has also donated huge amounts of money to many different charities throughout his life. This includes raising over 19,000 Euros for Birmingham’s Heartlands hospital.

Tony had also previously donated his old guitar to Wear Your Music, a non-profit organization that turns guitar strings into jewelry. It may not have been one of the most expensive guitars in the world, but it still raised £19,000 for charity.

During the Covid outbreak, he decided to auction off some of his personal items, including signed collectible DVD box sets, vinyl discs, and CDs to raise money to contribute to the UK’s National Health Service.

Perhaps in time, these collectibles will include some of the most expensive vinyl records in a fan’s collection.

With his unfortunate experience with cancer, he set aside a sizable amount as a donation as well as helped to raise money for cancer research.

He diversified his portfolio by investing in a soccer team and has a vodka brand as well.

When he first introduced his iconic style of playing in the 1970s, there was no one else in the music industry who sounded anything like him.

It was this raw new sound that attracted a new crowd of youngsters looking for a totally new sound to call their own.

Here are some of the best highlights of Tony Iommi’s career:

Tony Iommi will go down in history as a true legend and one of rock music’s finest guitarists of all time. His musical ability puts him on par with  Eric Clapton and Albert Lee, one of the best R&B and rock guitarists in the world.

Tony couldn’t wait to leave school and get out into the world and make his own money.

However, he wasn’t prepared for the hardships he’d face after being injured in an accident that almost ended his music career before it had even started.

Here are our favorite quotes from Tony Iommi:

Tony was always pushing the envelope, trying new sounds and attempting something unique and different.

It was this approach to music that enabled him to overcome his injuries and create a genre of music that is developing to this day.

Tony Iommi has always been a dreamer. But his dreams bore fruit due to his tremendous work ethic and willingness to get stuck and make it work.

Now that you know all about Tony Iommi’s net worth, here are some of the best success lessons to learn from Tony Iommi:

1. Surround Yourself With People Who Will Push You In The Right Direction

Tony has revealed that playing with his fellow bandmates has helped push him in the right direction. Sometimes, all we need is support from those around us.

Tony started life in normal day-to-day jobs and was all set to pursue a regular career, but he had a dream of becoming a rock star and he didn’t stop until he became a living legend.

He didn’t take the usual musical route, but rather did things his own way. Tony believes that the only way you will be happy is to follow your own rules without disrespecting other people’s rules in the process.

Tony Iommi will go down in history as one of the all-time greatest guitarists. He will also be remembered for his part in making Black Sabbath one of the best rock bands in history.

He single-handedly created a new genre of music and made an invaluable contribution to rock music. No matter the obstacles he faced, he fought to create a legacy that will live on forever.

What do you think about Tony Iommi’s net worth? Leave a comment below.