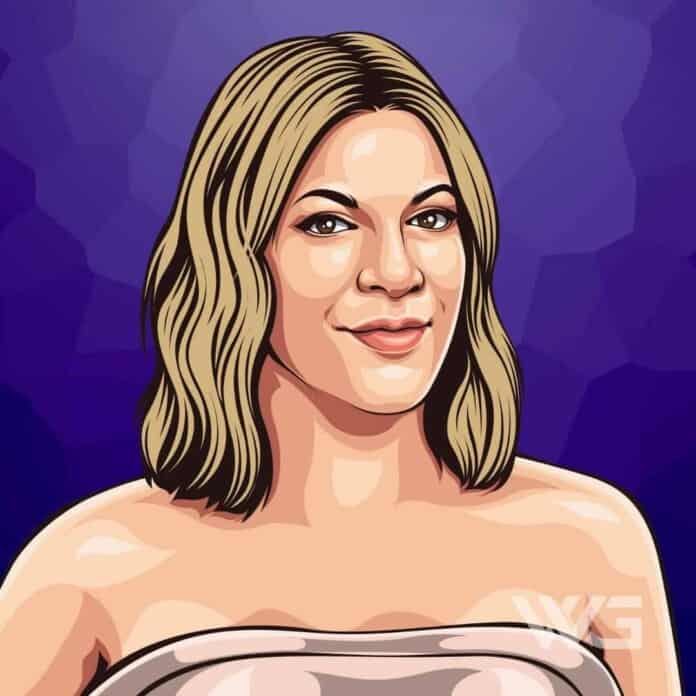 What is Tori Spelling’s net worth?

As of December 2022, Tori Spelling’s net worth is estimated to be roughly $1.5 Million.

Victoria Davey Tori was born on the 16th of May, 1973, in Los Angeles. She is the daughter to Jewish parents Aaron and Candy Spelling, Aaron was a famous Hollywood director who produced popular movies such as ‘Charlie’s Angels’, ‘Dynasty’ and ‘Fantasy Island’.

When she was six she took acting classes and even got the chance to appear as a guest in some movies which include ‘The Love Boat’, ‘T. J. Hooker’, ‘Hotel’, ‘Fantasy Island’, ‘Vega$’, and ‘Saved by the Bell’.

In 1990, she was given the role of Donna Martin on the television series ‘Beverly Hills, 90210’, which was co-produced by her father. The success of ‘Beverly Hills’ opened the doors for new opportunities and soon she was cast in several made-for-television films.

After the completion of ‘Beverly Hills’, she debuted on stage with the play ‘Maybe Baby, It’s You’ in 2002. Her next big venture was in the VH1 sitcom ‘So NoTORIous’ in 2006, where she appeared as herself.

She hosted the animated television series ‘My Little Pony: Friendship Is Magic’, in the finale of its second season, aired on April 21, 2012.

‘Yo Gabba Gabba!’, an American children’s television show, had her as their special guest on the eve of Christmas on December 18, 2012, where she was seen baking cookies.

Here are some of the best highlights of Tori Spelling’s career:

“Its always when you think that you’ve lost a little of the baby weight that someone steps in grabs a handful of a now sans baby soft belly and asks the inevitable When are you due?” – Tori Spelling

“When a marriage fails, the story of the relationship changes. The best parts, the parts that made you think getting married was a good idea, fade from memory.” – Tori Spelling

“It’s much harder to give up on family. Deep down you want it to work so badly that you keep making the same mistake.” – Tori Spelling

“I want to be a positive role-model for my daughter. The last thing I want to put out there is that it’s acceptable to be too thin or have an eating disorder because you’re in Hollywood.” – Tori Spelling

“Sometimes, when I’m alone, I put on six-inch heels and wear nothing else and dance around in front of the mirror and do my little stripper dance.” – Tori Spelling

Now that you know all about Tori Spelling’s net worth, and how she achieved success; let’s take a look at some of the lessons we can learn from her:

1. Be Skeptical of Celebrity Assertions

Celebrities want us to believe they’re just regular folks like you and me, but that ignores a very key difference between those with fame and those without.

For celebrities, their bodies are a key part of their brand, their image, their product. When it’s your job to look good in front of a camera, you are going to pull out all the stops: Expensive personal training sessions, in-home healthy chefs, or – in this unfortunate case – extreme, dangerous dieting techniques.

So when we read interviews with movie stars that are all “I easily lost the baby weight and you can too!!!” we should take it with a grain of salt.

It seems like a no-brainer – why should I judge my post-baby body based on what I see in the magazines? – and yet we still fall prey to the comparison game all the time.

Even though we’re fully aware that the images and reports portrayed in the media are totally falsified, be it through airbrushing, photoshopping, or celebrity fibs, we still bemoan the fact that our thighs are thicker than Jessica Alba’s and our abs are flabbier than Kate Hudson’s.

Tori Spelling’s admission is further proof that such comparisons are completely and utterly futile.

3. Be Realistic About Your Own Post-Partum Weight Loss

There’s a lot of truth to the saying, “It took 9 months to put the weight on, it will take 9 months to get it off.”

Crash dieting is never healthy, but – despite Tori Spelling’s example – starving yourself is particularly harmful right after giving birth.

A breastfeeding mom requires extra calories, not fewer, to ensure an adequate milk supply, and forget about getting through the sleepless nights and daytime demands of having a newborn without the proper fuel. All the more reason to ignore the pressures to drop the baby weight quickly through an extreme diet.

How much is Tori Spelling worth?

Tori Spelling’s net worth is estimated to be $1.5 Million.

How old is Tori Spelling?

How tall is Tori Spelling?

Tori Spelling is a successful television actor and an author who has some bestselling books to her credit. She also has a clothing and jewelry line which also runs successfully.

What do you think about Tori Spelling’s net worth? Leave a comment below.

French professional basketball player Even Fournier has earned millions during his two-decade career with the NBA.