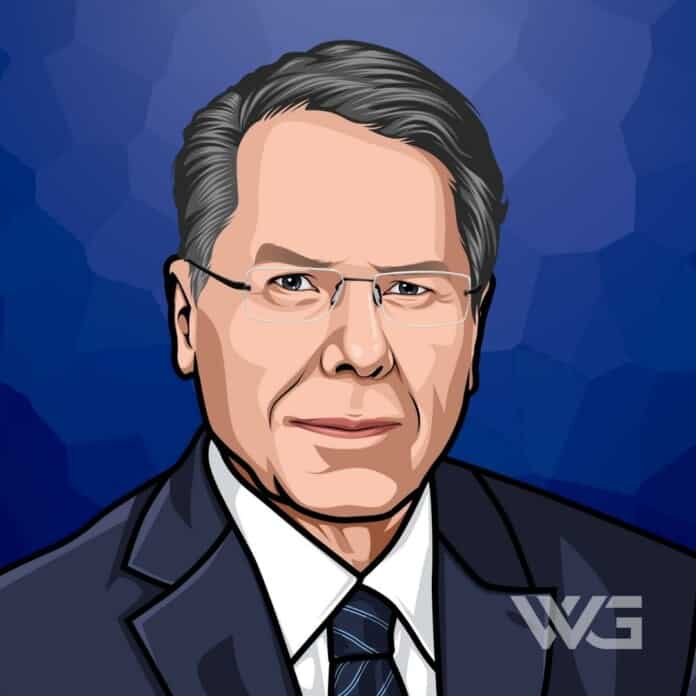 What is Wayne LaPierre’s net worth?

LaPierre serves as the executive vice president of the National Rifle Association since 1991. He is a US author and advocate of the right to keep and bear arms. He is known for his criticism of gun control proponents.

Wayne Robert LaPierre was born on the 8th of November, 1949, in New York. LaPierre is the eldest child of Hazel and Wayne Robert Sr.

His father was an accountant for the local General Electric plant. His family traces their patrilineal heritage to a 17th-century French ancestor. LaPierre’s family moved to Roanoke, Virginia, when he was 5 years old. He was raised in the Roman Catholic church.

LaPierre has been a government activist and lobbyist since he received his master’s degree in government and politics. Since 1991, LaPierre has served as EVP and executive chief of the NRA, which is the largest gun-rights advocacy and firearms safety training organization in the U.S. He joined the NRA in 1977.

NRA contributions totaled $103 million, and LaPierre’s compensation was $985,885 in 2014. The same year, he received a $3.7 million deferred compensation distribution.

Throughout his career, he has authored the books ‘Guns, Crime, and Freedom, Shooting Straight: Telling the Truth About Guns in America’, ‘Guns, Freedom, and Terrorism,’ ‘The Global War on Your Guns,’ ‘The Essential Second Amendment Guide,’ and ‘America Disarmed: Inside the U.N. and Obama’s Scheme to Destroy the Second Amendment.’

In 2018, due to the Stoneman Douglas High School shooting, where 17 students and adults were killed, LaPierre delivered a speech. He criticized the FBI, the media, and gun control advocates.

How Does Wayne LaPierre Spend His Money?

Wayne LaPierre has an impressive net worth, and he likes to travel and spend money on lavish clothing. When he travels, he likes to go to places such as the Bahamas.

Lapierre used NRA funds to take his family around the country on private jets.

LaPierre likes to dress fancy, and he has spent hundreds of thousands of dollars on wardrobe expenses, including spending  $39,000 in one day alone shopping.

Here are some of the best highlights of Wayne LaPierre’s career:

“We are the millions and millions of Americans who take responsibility for our own safety and protection of our children as a God-given right. We are proud to exercise that right, are not ashamed of it, and deserve nothing less than absolute respect and admiration as lawful gun owners.” – Wayne LaPierre

“After Hurricane Sandy, we saw the hellish world that the gun prohibitionists see as their utopia. Looters ran wild in south Brooklyn. There was no food, water, or electricity. And if you wanted to walk several miles to get supplies, you better get back before dark, or you might not get home at all.” – Wayne LaPierre

“The media try to make rank-and-file Americans feel guilty about buying a gun. The enemies of freedom demonize gun buyers and portray us as social lepers. But we know the truth. We know that responsible gun ownership exemplifies what is good and right about America.” – Wayne LaPierre

“Billionaire Michael Bloomberg, among the world’s richest men, believes his personal fortune can erase the liberty of every American who would exercise the right to keep and bear arms. He plans liquidation of our rights a step-at-a-time – spending millions of dollars of his bottomless personal fortune at a time.” – Wayne LaPierre

“Facts tell us that criminalizing private transfers of firearms among family members and friends under a universal background check system would do nothing to prevent gun violence,’ and importantly, would not have prevented the profound tragedies that gun banners use to promote such a system.” – Wayne LaPierre

Now that you know all about Wayne LaPierre’s net worth and how he achieved success; let’s take a look at some of the lessons we can learn from him:

What gun owners would support policies that are blatantly designed to strip them of their constitutional freedom? To put it bluntly: gullible gun owners.

How much is Wayne LaPierre worth?

Wayne LaPierre’s net worth is estimated to be $20 Million.

How old is Wayne LaPierre?

How tall is Wayne LaPierre?

Wayne LaPierre is an American author and gun rights advocate who is the NRA’s executive vice president.

His position as an administrator of the United States’ largest gun-rights organization has got him into the public crowd. He has got a lot of criticism from supporters of gun control.

What do you think about Wayne LaPierre’s net worth? Leave a comment below.

Introduction  As of , MacKenzie Bezos' net worth is...