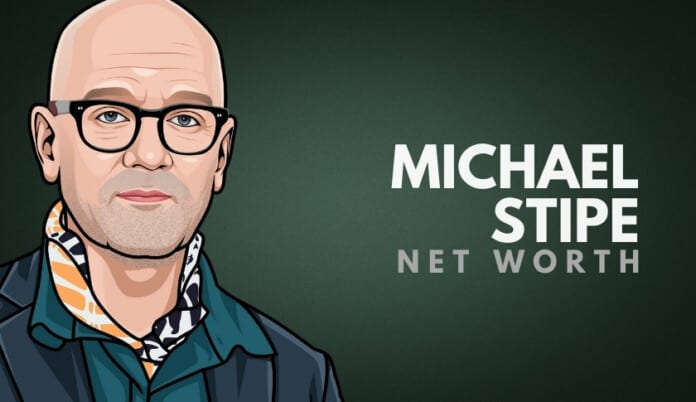 What is Michael Stipe’s net worth?

Michael Stipe is an American singer and songwriter.

Stipe is best known as the lead singer and lyricist of alternative rock band R.E.M.

He has been noted for the “mumbling” style of his early career. He was in charge of R.E.M.’s visuaö aspect, often selecting album artwork and directing many of the band’s music videos.

John Michael Stipe was born on the 4th of January, 1960, in Georgia. Stipe is the son of Marianne and John Stipe. His younger sister was born in 1962 and became the vocalist of her own band Hetch Hetchy.

Stipe and his family moved to various locations during his childhood. His senior photo is pictured in the album artwork of Eponymous. He also worked at the Waffle House, and he came from “a place of faith.”

Stipe went to college at the University of Georgia in Athens. He became friends with the store clerk Peter Buck. The two decided to form a band and started to write music together. He was a member of another band called Gangster at the time but left once he and Buck were joined by Bill Berry and Mike Mills.

In 1980, they all dropped out of school to pursue their music careers. They signed with the record label Hib-Tone, and after a successful show opening for the group The Police, they released their first single, ‘Radio Free Europe.’

Stipe wrote the song, and he stated that he didn’t intend for the lyrics to be intelligible to listeners. The single was a hit on college radio stations and got the band a better record deal with I.R.S. Records.

They dropped their album ‘Murmurs’ the following year. It was critically acclaimed and beat Michael Jackson’s album ‘Thriller’ for Rolling Stone Magazine’s Critics Poll Album of the Year.

Their second album ‘Rockoning’ was released in 1984, and it only took 16 days to record. The album was acclaimed by critics and peaked at no. 27 on the Billboard album charts.

In 1985, the band traveled to Europe to record their third album ‘Fables of the Reconstruction. It was a conceptual album. Despite the stylistic shift, it peaked at number 28 on the US album charts.

How Does Michael Stipe Spend His Money?

Here are some of the best highlights of Michael Stipe’s career:

“But we’re very much an American band and that’s that. I think that’s part of the appeal outside of this country and it might be part of the reason people turned away from us within this country because familiarity breeds contempt.” – Michael Stipe

“So, when you divide the world into music lovers, music fans and then those people who are just very casual about their music, it’s wallpaper to them, it’s elevator music, it’s just the thing that’s playing in the background that helps them through their day.” – Michael Stipe

“But I think the one thing that I can say about us is that we’re very consistent about certain things and part of that is our desire to do the very best work that we can and not rest on our laurels, or not allow formula to come into what we do.” – Michael Stipe

“We’re absolutely American and distinctly so, I think. That’s part of what people respond to outside of this country, part of the reason that we’re such a huge band outside of the U.S., where we’re not so popular now as we were 10 or 12 years ago.” – Michael Stipe

“So, we just kind of created our own thing and that’s part of the beauty of Athens: is that it’s so off the map and there’s no way you could ever be the East Village or an L.A. scene or a San Francisco scene, that it just became its own thing.” – Michael Stipe

Now that you know all about Michael Stipe’s net worth and how he achieved success; let’s take a look at some of the lessons we can learn from him:

When you meet a stranger, look at his shoes. Keep your money in your shoes.

Suppose you disagree with Stipe, fine! Because that’s the great thing about America, people can disagree!

Stipe is not gay, and he’s not heterosexual. He is just sexual.

How much is Michael Stipe worth?

Michael Stipe’s net worth is estimated to be $75 Million.

How old is Michael Stipe?

How tall is Michael Stipe?

Michael Stipe is an American musician who is best known as the lead singer for the band R.E.M., and he has worked as a producer on films including ‘Being John Malkovich‘ and ‘Man on the Moon.’

What do you think about Michael Stipe’s net worth? Leave a comment below.