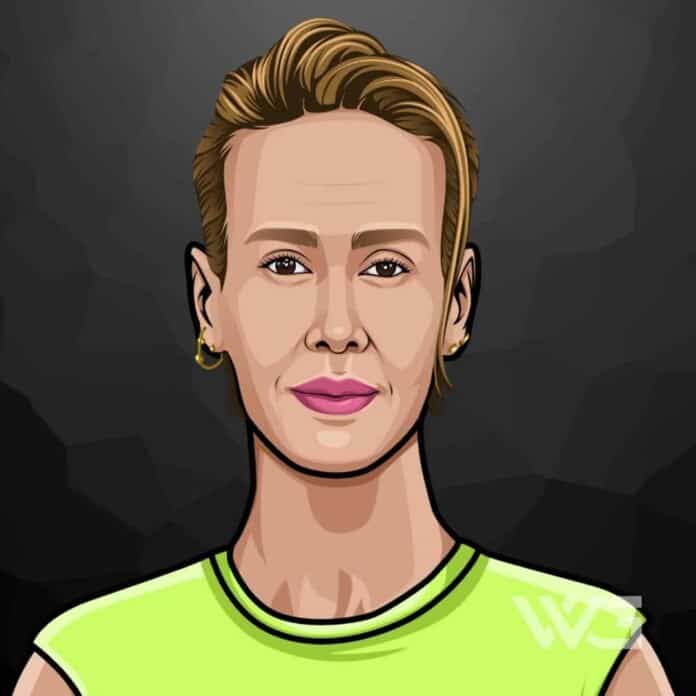 What is Sarah Paulson’s net worth?

Sarah Paulson is an American actress.

Paulson is the recipient of several accolades, including a Primetime Emmy Ward and. Golden Globe Awards. Paulson was raised in Florida and New York. After high school, she began her acting career and starred in the series ‘American Gothic’ and ‘Jack & Jill.’

She is probably best known for starring in the horror series ‘American Horror Story.’ She has also starred in movies such as ‘What Women Want,’ ‘Down With Love’ and ‘Path to War.’

As of December 2022, Sarah Paulson’s net worth is estimated to be roughly $12 Million.

Sarah Cathrine Paulson was born on the 17th of December, 1974, in Tampa, Florida. Her parents divorced when she was 5 years old. Her family relocated to New York City.

Paulson studied at Brooklyn’s P.S. 29 and Fiorello H. LaGuardia High School in Manhattan. In 1992, she graduated from the American Academy of Dramatic Arts. She began to perform in New York stage productions after graduating high school. She made her television debut in ‘Law & Order.’

Paulson appeared in the television film ‘Friends At Last’ in 1995. She then went on to star in the CBS series ‘American Gothic’ which ran for one season’ She took the lead role in the indie film ‘Levitation’ in 1997 and co-starred with Juliette Lewis and Diane Keaton in ‘The Other Sister’ in 1999.

Paulson then appeared in numerous films such as ‘Martha Marcy May Marlene,’ ‘New Year’s Eve,’ ‘Mud’ and HBO movie ‘Game Change,’ which earned her nominations from Primetime Emmys and Golden Globes.

She played medium Billie Dean Howard on ‘American Horror Story: Murder House’ in 2011. She went on to appear in nearly every season of the FX series.

Paulson earned critical acclaim and numerous awards for her performance as Marcia Clark in ‘The People v. O. J. Simpson: American Crime Story.’ In 2020, she starred as Nurse Mildred on the Netflix series ‘Rached.’

How Does Sarah Paulson Spend Her Money?

Sarah Paulson has gained her massive net worth from her acting career. She had her breakthrough when she starred in the popular horror series ‘American Horror Story’. She owns a lot of jewelry and has a beautiful home in Hollywood Hills.

Sarah Paulson owns a beautiful 2,100 square foot home in the Hollywood Hills. She purchased the home in 2016 for $1.65 million. It comes with three bedrooms and includes a guest house and swimming pool as well.

Paulson owns a lot of lovely jewelry. Some of her most notable pieces include gemstone chandelier earrings and a blue diamond necklace.

Here are some of the best highlights of Sarah Paulson’s career:

“It’s OK to sit in the Golden Globe room and look around and think, ‘Oh, Helen Mirren‘s a loser tonight, so is Nicole Kidman. Meryl Streep lost tonight. Jessica Lange didn’t win.’ If you’re gonna be in the company of losers, that’s the company to be in.” – Sarah Paulson

“The thing I worry about for myself is I spend a lot of time alone, and another person comes around, and you’re like, ‘What are you doing here? Get out of here.” – Sarah Paulson

“The idea of being on a show where each season stands alone, and you can come back the next year and show an entirely different aspect of your personality or your talent or your anything is an enormous gift that you rarely get in television.” – Sarah Paulson

“Sometimes I think on television, you use maybe a tenth of what you can do. So it’s nice to go, ‘Well, I’m gonna take two months and reinvest in acting and storytelling.’ You don’t get to do that on television.” – Sarah Paulson

“I’d love to be in the ’70s. I’d love to have a big, long wig parted down the middle with flat-ironed hair and bell-bottoms. They’re actually very flattering for my figure. The wider the leg, the better for a person with a booty.” – Sarah Paulson

“I was constantly, always and forever, trying to perform the musical ‘Annie’ for anyone who would listen, and I have a terrible singing voice. It was the first thing that made me think I wanted to be an actress.” – Sarah Paulson

Now that you know all about Sarah Paulson’s net worth and how she achieved success; let’s take a look at some of the lessons we can learn from her:

1. Believe That Everything Is Possible

To not have any hope is where things start to get really bleak. Things are possible. The impossible can be possible.

To truly feel seen by another person makes you feel so peaceful.

Looking back is a way to sharpen the focus on the things you want to change in your life.

How much is Sarah Paulson worth?

Sarah Paulson’s net worth is estimated to be $12 Million.

How old is Sarah Paulson?

How tall is Sarah Paulson?

Sarah Paulson is an American actress who is best known for her roles on ‘American Horror Story,’ ‘The People v. O.J Simpson: American Crime Story,’ and ‘Ratched.’

She has also starred in several films such as ‘What Women Want,’ ’12 Years a Slave’, ‘Carol,’ ‘Bird Box’ and ‘Ocean’s 8’. She has earned more than 20 awards for her work, including a Golden Globe, a Primetime Emmy, and Screen Actors Huilf Award.

The Netflix series ‘Ratched’ was viewed 48 million times in its first month of release.

As of December 2022, Sarah Paulson’s net worth is estimated to be roughly $12 Million.

What do you think about Sarah Paulson’s net worth? Leave a comment below.