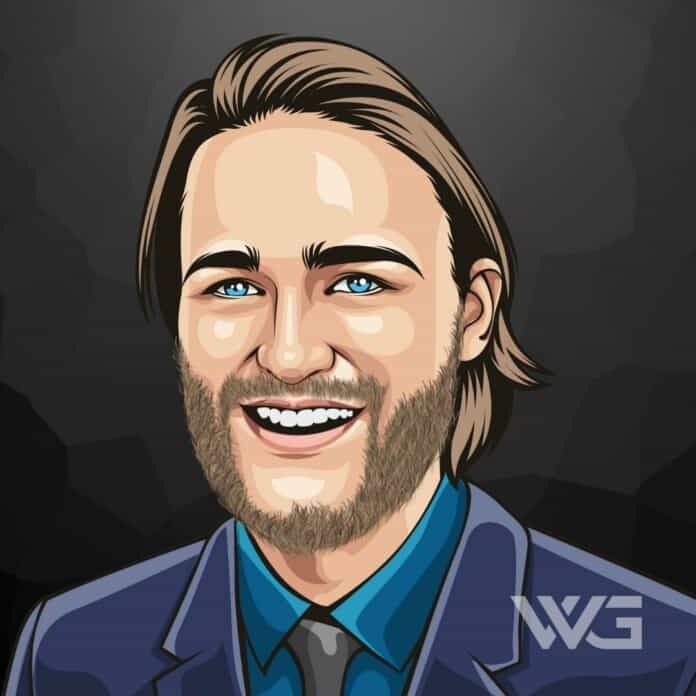 What is Wyatt Russell’s net worth?

As of November 2022, Wyatt Russell’s net worth is estimated to be $4 Million.

He made appearances in movies, too, in his early years. Russell concentrated on making a full-fledged career in acting. He has been part of several movies such as ‘22 Jump Street’ and ‘This Is 40.’

Wyatt Russell was born on the 10th of July, 1986, in Los Angeles, California. Russell is the son to Kurt Russell and Goldie Hawn. He has two older siblings from his mother’s previous marriage to actor Bill Hudson: Oliver Hudson and Kate Hudson.

Wyatt Russell was highly interested in sports when he was younger. His father got him enrolled in hockey leagues when he was only 4 years old. He attended the ‘University of Alabama.’ While in the university, he was a backup goalkeeper for their hockey team.

Wyatt Russell played junior hockey for the ‘Chicago Steel’ in the United States Hockey League. In 2005, Russell played as a backup goalkeeper for the Chicago Steel. Later, he was traded to the Brampton Capitals to play as their starting goaltender. In 2009, he started playing for the ‘Groningen Grizzlies’ in the Netherlands.

In 2010, Russell quit hockey and soon decided to pursue a full-time career in acting. At the age of 10, Russell made his movie debut with ‘Escape from L.A.’ The movie featured him as an orphan boy. In 1998, he appeared as ‘Todd’ in the movie ‘Soldier,’ which had his father, Kurt Russell, in the lead role.

Russell played the role of ‘Deputy Anders’ in the horror movie ‘We Are What We Are in 2013. The same year, he played ‘Paul’ in a few episodes of the popular TV series ‘The Walking Dead: The Oath.’

In 2013, Russell played ‘Topher Lincoln’ in the romantic drama ‘Love and Honor.’ In 2014, Russell played ‘Zook’ in the action–comedy movie ‘22 Jump Street’, where he worked alongside Channing Tatum and Jonah Hill.

‘Zook’ was one of the prime suspects in the drug-dealing case that served as the main plot of the movie.

In 2017, Russell starred in several other movies such as ‘Ingrid Goes West,’ ‘Table 19,’ and ‘Shimmer Lake.’ The same year, he played a prominent role in the movie ‘Goon: Last of the Enforcers.’

Here are some of the best highlights of Wyatt Russell’s career:

“When you’re an athlete, you’ve got the horse blinders on pretty thick. Your exploration of other things in life tends to be limited because you have to have such a focus on what you’re doing. I wasn’t a good enough player to stray from that focus and still keep my ability.” – Wyatt Russell

“I was in Toronto with my parents, and my dad took me to an outdoor hockey rink. I was 3 or 4, and I just remember everything about that day. For some reason, I thought, ‘This is it. This is what I’m supposed to do.’ And this is around the time that Gretzky came to L.A., so I immediately joined a hockey league.” – Wyatt Russell

“In hockey, it was a freak show. I’m the son of actors and from California, and in Canada, hockey is a religion, so me coming in, it was like, ‘Who the hell is this guy?’ I just had to put my head down and work really hard, and it was difficult, but it made me who I am and gave me a backbone.” – Wyatt Russell

“Recently, my dad has been teaching me a lot – like how to read a script. It used to just be about hockey or baseball or sports of whatever. We don’t have glitzy or glamour-y Hollywood-type talk, like, ‘Isn’t that person great?’ It’s more about the process of how it works.” – Wyatt Russell

“When I stopped playing hockey and started acting, the last person I was going to ask for help was my dad. He’s the kind of being like, ‘I don’t know. It’s good work if you can get it. Good luck.” – Wyatt Russell

Now that you know all about Wyatt Russell’s net worth, and how he achieved success; let’s take a look at some of the strongest lessons we can learn from him:

Is the person listening? If the person is not listening if you don’t pause for a breath every now and then. Just saying.

Fair is a place where you find cotton candy. Life is not fair. Never has life been fair and it will never be fair.

3. Always See the Good in People

See the good in people, but don’t be their welcome map or oblivious to their faults.

How much is Wyatt Russell worth?

Wyatt Russell’s net worth is estimated to be $4 Million.

How old is Wyatt Russell?

How tall is Wyatt Russell?

Wyatt Russell has played professional ice hockey for many years. After his exit from hockey, Russell concentrated on making a full-fledged career in acting.

He has been part of several movies such as ‘22 Jump Street’ and ‘This Is 40. Russell has definitely made a name for himself in the acting industry.

What do you think about Wyatt Russell’s net worth? Leave a comment below.