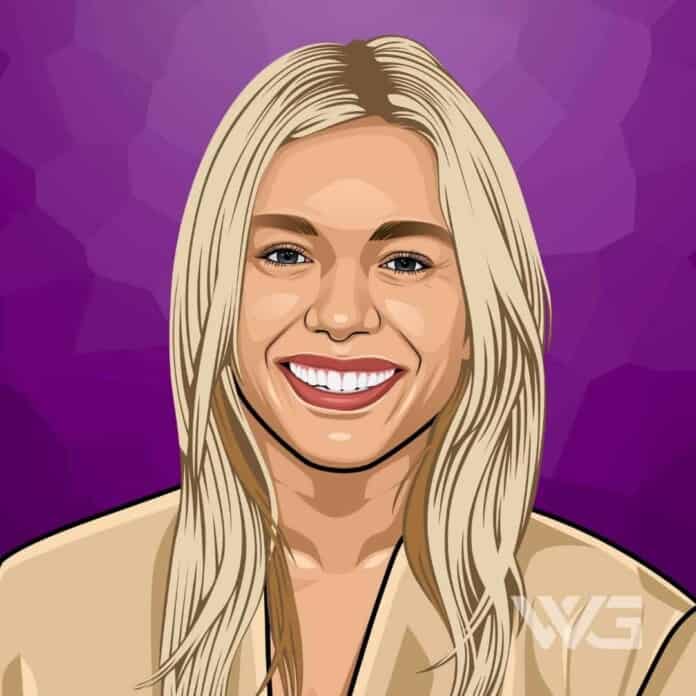 What is Sienna Miller’s net worth?

Sienna Miller is a British actress.

Miller was born in New York and raised in London. Miller began her career as a photography model, appearing in the pages of Italian Vogue and posing topless for the 2003 Pirelli calendar.

She had her acting breakthrough in the 2004 films Layer Cake’ and ‘Alfie.’ Her role as ‘The Baroness’ in ‘G.I. Joe: The Rise of Cobra’ was followed by a brief sabbatical from the screen amid increased tabloid scrutiny.

Sienna Rose Diana Miller was born on the 28th of December, 1981, in New York.

Miller moved to London with her family when she was 18 months old. Her mother is a South African-born British former model.

Edwin Miller is an American banker turned dealer of Chinese art. Her parents divorced in 1987, and Miller moved to Parsons Green with her mother. Her father remarried three times and moved to the Virgin Islands. She then attended Heathfield School. She used to act and play lacrosse during her school years.

Miller has starred in many high-profile movies. Her screen debut came in the romantic comedy ‘South Kensington’ in 2001. The following year, she had supporting roles in ‘High Speed’ and its follow-up ‘The Ride.’ She guest-starred in ‘The American Embassy’ and ‘Bedtime.’

With roles in commercial films and a higher public profile due to her relationship with Jude Law, it marked a turning point for Miller’s career.

She portrayed a writer of illegal feminist books and the love interest of Giacomo Casanova in the period dramedy ‘Casanova’ in 2005. The movie made a moderate $37.6 million, and Entertainment Weekly.

In ‘The Mysteries of Pittsburgh,’ Miller portrayed a woman romantically involved with a rebellious bisexual man. The film premiered at the Sundance Film Festival and received a limited release.

Miller starred alongside friend Keira Knightley in ‘The Edge of Love’ in 2008. It is a British biographical romantic drama. Despite mixed critical reception, The Hollywood Reporter critic Ray Bennett commented that The Edge of Love is a “wonderfully atmospheric tale of love and war.”

How Does Sienna Miller Spend Her Money?

Sienna Miller spends her money on charity work and cars.

Some of Miller’s most notable car purchases include a Lexus GS and an Audi TT.

Here are some of the best highlights of Sienna Miller’s career:

“It’s wonderful to feel supported, but there’s a lot of negative energy towards me as well. So I ignore it, to be honest. If I started to read it all, it would completely mess up my head.” – Sienna Miller

“The big thing I’ve discovered, the big secret, is that it’s all about how happy you are. It’s the ultimate thing. People forget your flaws and imperfections if they see you’re happy.” – Sienna Miller

“I would often find myself, at the age of 21, at midnight, running down a dark street on my own with 10 men chasing me. And the fact they had cameras in their hands made that legal.” – Sienna Miller

“With acting, there is a level of anonymity which is conducive to your profession. There are examples of very public people who are on the cover of every celebrity magazine but can’t open a film.” – Sienna Miller

“I feel we live in the kind of culture now where you have to be very smart to navigate the right way, and I don’t have those smarts. I think with age and time it will change, but I can’t obsess about it.” – Sienna Miller

“I think they’re just, it’s probably a cliche, the hospitable Italians tend to be just wonderful hosts, … And so, and we were living there for four-and-a-half months … and you’re just kind of faced with this beauty every day. It’s an inspiring place, and the light, and the food, you know.” – Sienna Miller

Now that you know all about Sienna Miller’s net worth and how she achieved success; let’s take a look at some of the lessons we can learn from her:

It’s reached this point where people are fascinated by every intricate detail of other people’s lives. And some people are willing to give up their lives like that.

People on the edge of love go with their hearts and not their heads.

The big thing and the big secret is that it’s all about how happy you are. It’s the ultimate thing. People forget your flaws and imperfections if they see you’re happy.

How much is Sienna Miller worth?

Sienna Miller’s net worth is estimated to be $18 Million.

How old is Sienna Miller?

How tall is Sienna Miller?

Sienna Miller is an English actress, model, and fashion designer who was born in New York City.

Miller is best known for her roles in ‘Layer Cake,’ ‘Alfie,’ ‘Factory Girl,’ ‘The Edge of Love’ and ‘G.I. Joe: The Rise of Cobra.’ Miller has been nominated for two BAFTAs and a Golden Globe.

What do you think about Sienna Miller’s net worth? Leave a comment below.