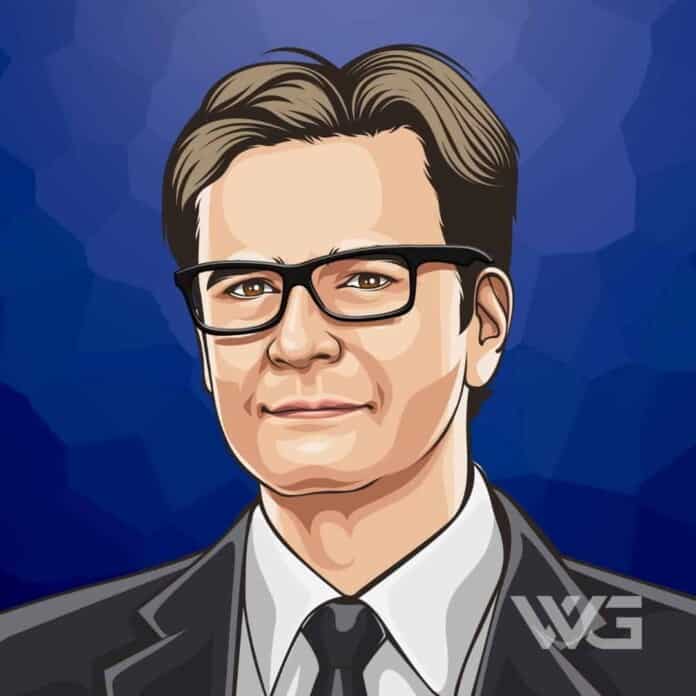 What is Colin Firth’s net worth?

Colin Andrew Firth was born on the 10th of September, 1960, in England. Firth is the son to Shirley Jean and David Norman Firth. His mother was a comparative religion lecturer while his father was a history lecturer.

He attended the Montgomery of Alamein Secondary School on his return to the U.K. where he found it hard to fit in. He was constantly bullied by his classmates, because of which he lost his interest in studies.

His first job was in the wardrobe department at the National Theatre. After this stint, he went to study at the Drama Centre London where he started appearing in stage productions.

In 1988, he portrayed the real-life soldier Robert Lawrence in the BBC drama ‘Tumbledown’ which was about the story of a brave soldier who is severely injured at the Battle of Mount Tumbledown. His role was highly acclaimed.

His breakthrough role happened in 1995. He was selected to play the haughty aristocrat Mr. Darcy in a television adaptation of Jane Austen’s ‘Pride and Prejudice’ which finally got him the fame he deserved.

He was part of the ensemble cast of the Christmas-themed film, ‘Love Actually’ in 2003 which explored the different aspects of love shown through ten interwoven stories. The year 2009 was a remarkable one for him.

He played King George VI in the epic historical drama, ‘The King’s Speech’ in 2010. The story revolves around how King George copes with a stammer and tries to overcome it.

Here are some of the best highlights of Colin Firth’s career:

“I work with the options I have in front of me and my reasons for choosing a job can vary enormously depending on the circumstances. Sometimes I take a job because it’s a group of people I’m dying to work with, and sometimes it can be a desire to shake things up a bit and not to take myself too seriously.” – Colin Firth

“Almost every comedy you see is about people making all the wrong choices and making all the errors of judgment possible. Good comedy is when it works on this scale. Because it is psychologically very real.” – Colin Firth

“It’s a very dangerous state. You are inclined to recklessness and kind of tune out the rest of your life and everything that’s been important to you. It’s actually not all that pleasurable. I don’t know who the hell wants to get in a situation where you can’t bear an hour without somebody’s company.” – Colin Firth

“I’m fully aware that if I were to change professions tomorrow, become an astronaut and be the first man to land on Mars, the headlines in the newspapers would read: `Mr. Darcy Lands on Mars.” – Colin Firth

“When I’m really into a novel, I’m seeing the world differently during that time— not just for the hour or so in the day when I get to read. I’m actually walking around in a haze, spellbound by the book and looking at everything through a different prism.” – Colin Firth

Now that you know all about Colin Firth’s net worth, and how he achieved success; let’s take a look at some of the lessons we can learn from him:

Firth almost gave up several times, but in the end, he persisted. A tip: Remove the exit strategy. Also known as “shutting the back door.”

A healer, someone who can guide you through and past that thing that seems like an overwhelming obstacle. Bertie found an Australian speech therapist named Lionel Logue (brilliantly played by Geoffrey Rush.)

3. Do Whatever it Takes

How many times are you willing to say the tongue twister about thistle sifters? Watch Colin Firth as he takes “the long walk” to the microphone. He embodies dread, the desire to be anywhere else in the world – yet there he is.

How much is Colin Firth worth?

Colin Firth’s net worth is estimated to be $25 Million.

How old is Colin Firth?

How tall is Colin Firth?

Colin Firth is an award-winning actor best known for portraying King George VI in ‘The King’s Speech’ which won him an Academy Award along with several other honors.

As of February 2023, Colin Firth’s net worth is approximately $25 Million.

What do you think about Colin Firth’s net worth? Leave a comment below.