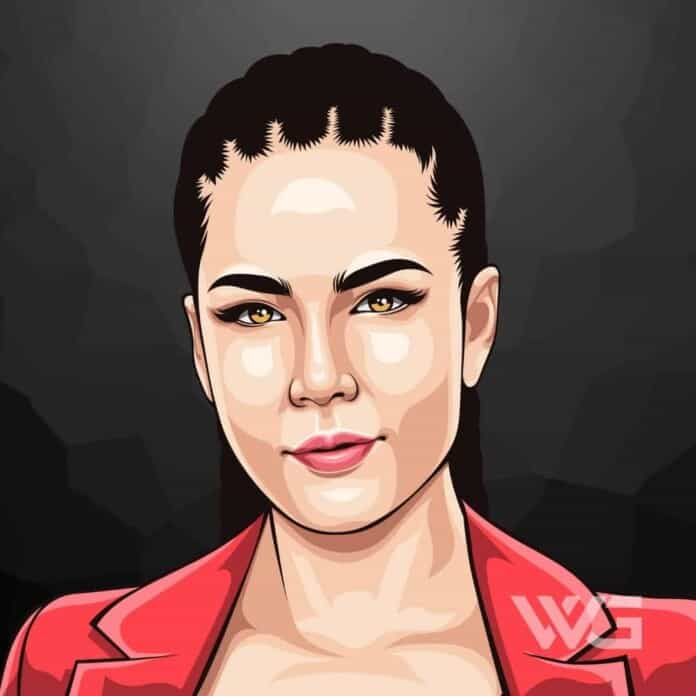 What is Halsey’s net worth?

Ashley Nicolette Frangipane, known professionally as Halsey, is an American singer and songwriter from Clark, New Jersey. Her stage name is a reference to the Halsey Street station of the New York City Subway in Brooklyn. She released her debut EP in 2014.

Ashley Nicolette Frangipane “Halsey” was born on the 29th of September, 1994, in Clark, New Jersey. Her father is of African-American descent while her mother Nicole is of Italian. She has two brothers.

Halsey began her career on YouTube where she posted cover songs.

In 2012 she recorded a song titled ‘The Haylor Song’ which was a parody of Taylor Swift‘s ‘I Knew You Were Trouble”. It was about Swift’s relationship with Harry Styles, the English singer, and songwriter. It received wide attention worldwide.

In 2014, she recorded a song named ‘Ghost’ which she posted on SoundCloud. The Song became a huge hit, earning her a lot of popularity.

Because of her incredible performance, a lot of recording labels came forward wanting her to sign with them. She initially signed with the Astralwerks record label, a US-based record label that focuses mainly on electronic and dance music.

The same year she released her first extended play too. It was titled ‘Room 93.’ Accompanying videos were made as well, for four of the five songs.

In 2015 saw the release of her debut album ‘Badlands’ in August. In order to promote her music, she was featured in several interviews such as ‘The Late Show with Stephen Colbert’ and ‘Last Call with Carson Daly.’

Slowly her popularity and fan base started growing more and more, which pushed her into the mainstream platform. Her online fan base grew even more, with 3.9 million followers on Twitter, and 3.8 million on Instagram as of early 2017.

Here are some of the best highlights of Halsey’s career:

“Do you tear yourself apart to entertain like me? Do the people whisper ’bout you on the train like me? Saying that you shouldn’t waste your pretty face like me?” – Halsey

“I’ve missed your calls for months it seems, don’t realize how mean I can be, ’cause I can sometimes treat the people that I love like jewelry.” – Halsey

“My mom is awesome. She’s really young. My mom is 40, and she raised me listening to Nirvana and Courtney Love and Coldplay, Gin Blossoms, The Cranberries, and stuff. Like, my early, early memories are of being a little kid running around in floral skirts and Doc Martens when I was, like, three.” – Halsey

“In one week, I went from being a girl who owed a guy thousands of dollars – my manager Anthony was paying for my outfits, paying for my food; I was sleeping in his parents’ basement – to taking meetings with every major label in America. The next morning, I had a record deal and wrote him a cheque to pay back all that money.” – Halsey

View our larger collection of the best Halsey quotes!

Now that you know all about Halsey’s net worth, and how she achieved success; let’s take a look at some of the strongest lessons from her:

Next time you want to complain about something, imagine there was no one around to listen. Would you still complain? No, you’d probably get back to work. Complaining is the absolute worst possible thing you could do for your health or your wealth

Your quirks are what make you, well, you. And if you want to be remembered, you need to own your weirdness.

How much is Halsey worth?

Halsey’s net worth is estimated to be $20 Million.

How old is Halsey?

How tall is Halsey?

Halsey has definitely made a name for herself in the music industry. Her debut studio album ‘Badlands’ became a huge hit in 2015, selling 97,000 copies in the US within its first week.

As of December 2022, Halsey’s net worth is estimated to be roughly $20 Million.

What do you think about Halsey’s net worth? Leave a comment below.