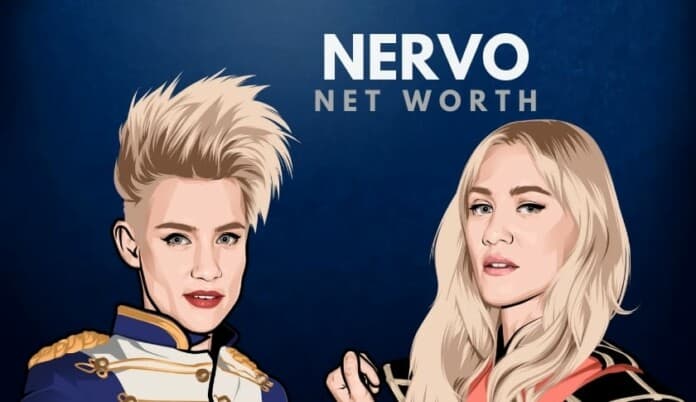 What is Nervo’s net worth?

Nervo is an Australian DJ duo.

After signing with Sony/ATV Music Publishing at 18 years of age, the sisters pursued careers as songwriting partners, and in 2008 they signed with Fredrik Olsson and his Swedish music publishing company Razor Boy Music Publishing. They have been described as the world’s highest-paid women DJs.

As of December 2022, Nervo’s net worth is approximately $54 Million.

The twin sisters were born on the 17th of February, 1982, in Melbourne.

The twins studied at Genazzano FCJ College, a girl’s school in Kew, where they participated in rowing and swimming but were mainly involved in music. They completed Year 12 and graduated in 1999.

When the sisters were sixteen, a modeling agency took an interest in the pair, but Liv Nervo stated in April 2012 that music “was always the focus” for them. The sisters were accepted into the Opera Australia Academy but decided to pursue a music career instead.

In 2005, the duo released the single ‘Boobjob,’ which received substantial airplay in their native Australia. The duo wrote for Kesha, Richard Grey, Sophie Ellis-Bextor, Ashley Tisdale, and the Pussycat Dolls.

In March 2010, Nervo announced a worldwide recording deal with Virgin Records/EMI Music, which included a joint venture to release new artists that Nervo discover and produce. They also served as ambassadors at the L’Oreal Fashion Festival.

Nervo began their 2013 music production schedule with ‘Like Home,’ with Nicky Romero, followed by the Nervo single ‘Hold On, released to iTunes on 9 April.

In 2018, the duo’s collaboration with Sofi Tukker, The Knocks, and Alisa Ueno on the former’s ‘Best Friend’ gave Nervo their first number one on Billboard’s Dance/Mix Show Airplay Chart in its January 20, 2018 issue.

As of December 2022, Nervo’s net worth is estimated to be roughly $54 Million.

Here are the best highlights of Nervo’s career:

“In many ways, it’s a great time to be in music as we can all release music online and on our own if we want. We can easily reach our collaborators through their Instagram or Soundcloud pages, and we get to use social media to promote everything from a release to a branding deal to our own personal lives.” – Nervo

“Although technology makes our lives easier (to record), there are parts to it that also make our lives more difficult. We can get caught up in the perfectionism of programming and can lose the feeling of freedom.” – Nervo

“We entered the business when it was already digital, but we have worked with people who used to record on tape, where those guys also pulled long hours in the studio. Some tech toys in our music studio include the Jupiter 6 keyboard, MacBook, Logic Pro X, Yamaha MSP monitors, and the Shure microphone.” – Nervo

“We’ve had mixed emotions – we’re nervous, obviously. But also excited and relieved. It’s our first album, and to be fair now we’re really looking forward to seeing how people are going to react to it.” – Nervo

“Collateral for us means everything we’ve been through to date has brought us here. It’s all collateral. There were several dark years where we were at a bit of a crossroad. We thought we were going to give up the music business altogether. We have a mentor in the business who would always tell us to have patience.” – Nervo

Now that you know all about Nervo’s net worth and how he achieved success; let’s take a look at some of the lessons we can learn from him:

You have power over your mind – not outside events. Realize this, and you will find strength.

Music is fun. Make beats that will make the crowd go crazy.

How much is Nervo worth?

Nervo’s net worth is estimated to be $54 Million.

How old is Nervo?

How tall is Nervo?

Nervo consists of twin sisters Miriam and Olivia Nervo. As teenagers, they worked as models but opted to focus on songwriting and production. Today the sisters are one of the highest-paid female DJs in the world.

These multi-talented DJ dynamos are the all-time top-ranking female DJs worldwide, voted by their millions of fans.

As of December 2022, Nervo’s net worth is approximately $54 Million.

What do you think about Nervo’s net worth? Leave a comment below.

What is Paget Brewster's net worth? Introduction As of ,...