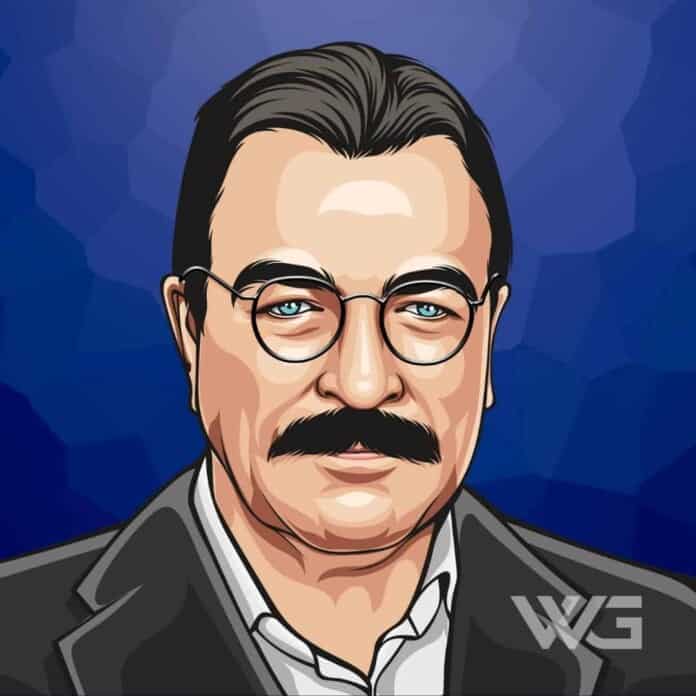 What is Tom Selleck’s net worth?

As of December 2022, Tom Selleck’s net worth is approximately $45 Million.

Tom Selleck is an American actor and film producer from Detroit. Selleck is best known for starring as private investigator Thomas Magnum in the television series ‘Magnum, P.I. and as Peter Mitchell in ‘Three Men and a Baby’.

Since 2010, he has starred as NYPD Commissioner Frank Reagan in the hit crime drama ‘Blue Bloods’ on CBS.

Thomas William Selleck was born on the 29th of January, 1945, in Detroit. His father was an executive and real estate investor while his mother was a housewife. He has three siblings.

Selleck went to Grant High School from where he graduated in 1962. He was of athletic built and played several sports. He earned a basketball scholarship to attend the University of Southern California.

Selleck began his acting career playing a small role in television series. He appeared as a college senior on the show, ‘The Dating Game’, in 1965.

During 2007-08, he appeared as A.J. Cooper in the television series ‘Las Vegas’. The show focused on a group of casino employees who dealt with issues arising within the working environment.

Starting from 2010 he has been starring in the police drama series ‘Blue Bloods’ as Frank Reagan. The series follows the life and works of a family of police officers with the New York City Police Department.

Here are some of the best highlights of Tom Selleck’s career:

“And besides, because of all she has accomplished, Barbara Jordan has always been a hero of mine” – Tom Selleck

“Having had that experience… I think, what modern culture wants to see is the relationship with the woman.” – Tom Selleck

“I praise CBS for taking a risk, which is always the price you pay for the opportunity. This is not a standard movie of the week storytelling. I think movies of the week have fallen into a niche and that isn’t my niche” – Tom Selleck

“I guess after Dances With Wolves they probably tried some derivative westerns, and if they didn’t work, they said the western is dead and moved on to something else” – Tom Selleck

“The Westerns I like aren’t really comedies. I’m drawn to the scope of them and the land as a central character.” – Tom Selleck

Now that you know all about Tom Selleck’s net worth, and how he achieved success; let’s take a look at some of the leadership lessons we can learn from him:

1. Hunt for the Truth

Wherever the hunt takes you. Both private investigator Thomas Magnum and lifelong cop Frank Reagan hunt the truth. And they don’t stop until they find it. Then the hard part: accepting the truth. Frequently, the biggest obstacles Magnum and Reagan face is emotional — someone they liked and trusted turns out to be a bad guy.

2. Be True to Yourself

In most episodes of Magnum, P.I. or Blue Bloods, Selleck’s character has a moment of self-revelation. An instant where he has to admit he was wrong or had been duped, misplaced his trust or acted out of personal selfishness.

Because this is television, and because Magnum and Reagan are heroes, they admit what they’ve done. This may sound awfully high-minded, but it’s not. In 1797, George Washington voluntarily stepped down as the first President of the United States.

The American people wanted him to stay. Washington knew that retiring was the right thing to do.

3. Encourage Growth in Others

How much is Tom Selleck worth?

Tom Selleck’s net worth is estimated to be $45 Million.

How old is Tom Selleck?

How tall is Tom Selleck?

Tom Selleck is an actor made famous by his portrayal of the private investigator Thomas Magnum in the television series, ‘Magnum, P.I.’, with his serious looks, stern demeanor and trademark mustache, he makes a good choice to play cops and investigators roles he had often been offered to portray.

What do you think about Tom Selleck’s net worth? Leave a comment below.