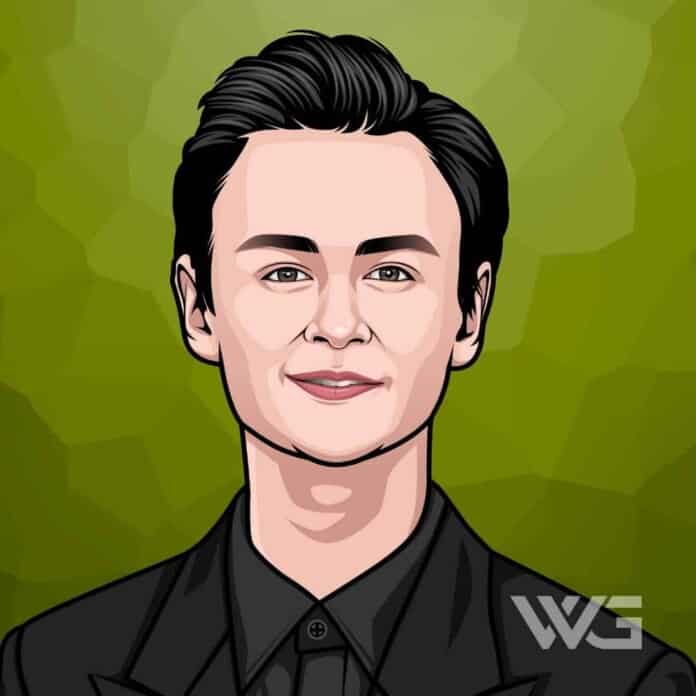 What is Jaeden Martell’s net worth?

Jaeden Martell is an American actor.

Martell has played the role of Bill Denbrough in the film adaptions of the Stephen King novel ‘It.’ He has appeared in the mystery film ‘Knives Out’ and he has also starred in the miniseries ‘Defending Jacob.’  Although stepping into showbiz was not something he expected, his journey to stardom seemed to be destined.

One after another notable film followed that he played lead roles with some big names of the industry, including Bill Murray, Naomi Watts, Bradley Cooper, and Emma Stone.

He has also forayed into television with the series ‘American Dad!’ and ‘Masters of Sex.’

Jaeden Martell was born on the 4th of January, 2003, in Philadelphia, Pennsylvania. Martell is the son of Wes Lieberher, a Los Angeles executive chef and Angele Teresa Martell.

His maternal grandmother is from Korea. He grew up in South Philadelphia, and when he was 8 years old, he moved to Los Angeles. In the first years of his career, he was credited almost exclusively under his family name, Lieberher. In 2019, he switched to his mother’s maiden name, Martell.

Martell’s first acting role was in a commercial for Hot Wheels. He then appeared in several other commercials after that, including Google, Moneysupermarket.com, Liberty Mutual, Hyundai, Verizon Fios, and General Electric. His first major feature film role was in ‘St. Vincent’ in 2014, where he starred alongside Bill Murray.

Murray later recommended Martell to Cameron Crowe for the film ‘Aloha’ in 2015. He played the title character in the movie ‘The Book of Henry’ in 2017. He received further recognition for his starring role as Bill Denbrough in the 2017 supernatural horror film ‘It’ and follow-up ‘It: Chapter Two.’

In 2019, he was a part of Rian Johnson’s ensemble cast in the murder-mystery film ‘Knives Out.’ The same year, he joined the cast of the Apple miniseries Defending Jacob’. The miniseries was based on the William Landay novel of the same title, which reunites him with ‘Knives Out’ co-star Chris Evans.

The following year, in an Instagram Live interview, he confirmed that he had joined the cast of ‘Tunnels’ co-starring with Susan Sarandon.

Here are some of the best highlights of Jaeden Martell’s career:

“I watched the directors’ first movie to get comfortable with the tone and the overall feeling of their films. I studied who my character was and his relationship with the other characters, the most important one being with his sister, whom he is very protective of.” – Jaeden Martell

“We were in a real lodge, surrounded by snow, and it was extremely cold. The set had the same tone as the movie, so it was easy to get into that mindset. The directors also really helped me get into the role by making me feel both comfortable and uncomfortable.” – Jaeden Martell

“I learned a lot from Bill. St. Vincent being my first movie, I was constantly terrified and stressed. I was so young and was traveling to New York to shoot, and Bill taught me how to relax, to be comfortable. I had to learn a six-page monologue and speak to a giant crowd of people, which was so scary for a 10-year-old.” – Jaeden Martell

“It’s challenging to always be scared. It’s an interesting emotion that you have to find a balance with. If you see a killer clown trying to eat your friends, obviously you can’t relate directly to that and go into a memory to find something similar.” – Jaeden Martell

“This was not very light-hearted but felt that way. It felt like being in a room full of egotistical family members fighting over something. It was very fun to show this constant bickering. The crowd of actors was amazing. They were all so sweet.” – Jaeden Martell

Now that you know all about Jaeden Martell’s net worth and how he achieved success; let’s take a look at some of the lessons we can learn from him:

Don’t quit yet. The worst moments are usually followed by the most beautiful silver linings. You have to stay strong, remember to keep your head up, and remain hopeful.

Start where you are. Use what you have. Do what you can. Always be okay by doing you’re best. You can’t do more than that, right.

Success is liking yourself, liking what you do, and liking how you do it.

How much is Jaeden Martell worth?

Jaeden Martell’s net worth is estimated to be $1 Million.

How old is Jaeden Martell?

How tall is Jaeden Martell?

Jaeden Martell is an American actor. Martell is best known for starring as Bill Denbrough in the ‘It’ films series.

He was born in Pennsylvania in 2003. Martell is the son of executive Wes Lieberher. He made his acting debut in ‘Grief.’ From 2015 to 2016, he starred as Johnny Masters on the series ‘Masters of Sex.’

He has appeared in several movies, including ‘St. Vincent,’ ‘Playing It Cool,’ ‘Aloha,’ ‘Midnight Special,’ ‘The Confirmation,’ ‘The Book of Henry,’ ‘It,’ ‘The Lodge,’ ‘Low Tide,’ ‘The True Adventures of Wolfboy,’ ‘It Chapter Two,’ and ‘Knives Out.’

What do you think about Jaeden Martell’s net worth? Leave a comment below.

What is Hardwell's net worth? Introduction  Hardwell is a Dutch DJ,...