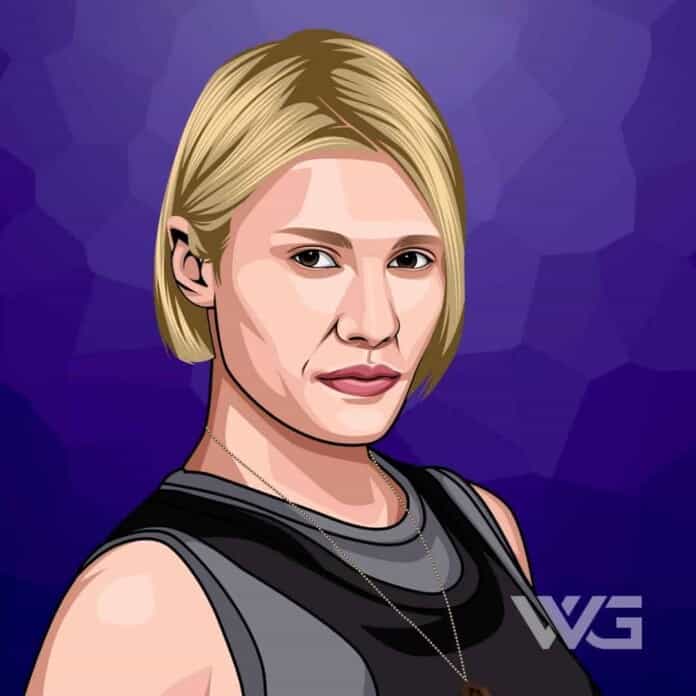 What is Katee Sackhoff’s net worth?

As of December 2022, Katee Sackhoff’s net worth is roughly $4 Million.

She was nominated for four Saturn Awards for her work on Battlestar Galactica and won the award for Best Supporting Actress on Television in 2005.

She pursued graduated from ‘Sunset High School’ in Beaverton in 1998. As a child she was deeply interested in sports and took up swimming at an early age; however, she could not pursue it for long due to an injury in the right knee.

Sackhoff landed her first role in the American television drama film ‘Fifteen and Pregnant’, where she played the supporting role of a teenager Karen Gotarus alongside Kirsten Dunst. Over the ensuing years she played various roles in television in ‘Locust Valley’, ‘Zoe, Duncan, and ‘Jack and Jane’.

Again taking a break from movies once again, she acted in various television series like ‘Law & Order’, ‘Nip/Tuck, ‘24’, and ‘CSI: Crime Scene Investigation’.

She delivered a voice-over for the animated superhero film ‘Batman: Year One’ for the character of detective Sarah Essen. Her television career soared higher with important roles in ‘Workaholics’, ‘Star Wars: The Clone Wars’, and ‘Longmire’.

In the mid-2010s, she was cast in the supernatural thriller ‘Oculus’ and a crime thriller ‘Tell’. Katee Sackhoff also played the role of Kimberly Scott in the short film ‘Power / Rangers’ and a comedy family film ‘Girl Flu’.

Here are some of the best highlights of Katee Sackhoff’s career:

“I’d never put all my chips anywhere, because I don’t want to close any doors, but I was raised in a very blue-collar family. I was raised by parents who said, ‘If you don’t go to work every day, you’re not contributing’, so that’s my mentality.” – Katee Sackhoff

“I’m a bit insane when it comes to doing my own stunts and getting down and dirty. It’s fun, you know? Its things I wouldn’t normally do in my real life, so when I go to work and get to beat people up and shoot guns and get waterboarded, those are things I find completely interesting.” – Katee Sackhoff

“Science fiction fans are awesome, they love you so much that they’ll watch anything you do, even if it’s complete crap. I never dreamed that I would go to conventions and sit down and have coffee with a Klingon. It’s so weird, but it’s my life.” – Katee Sackhoff

“I am tired of women playing action heroes like men because they are not men. But sometimes they are written like men.” – Katee Sackhoff

“I think God’s wrath and purgatory are the only things keeping me on the straight and narrow. I like the idea of purgatory. It’s like a cosmic do-over.” – Katee Sackhoff

Now that you know all about Katee Sackhoff’s net worth, and how she achieved success; let’s take a look at some of the lessons we can learn from her:

1. Life Can Be Disappointing

You keep struggling to achieve your goals in life, and once you get close, you get struck by lightning

Do you want to know how to navigate life? Don’t live and die by the beliefs you had when you were young. Everything changes, that’s what you learn when you’ve lived.

How much is Katee Sackhoff worth?

Katee Sackhoff’s net worth is estimated to be $4 Million.

How old is Katee Sackhoff?

How tall is Katee Sackhoff?

Katee Sackhoff is an award-winning American actress and producer best known for her role as ‘Starbuck’ or ‘Lieutenant Kara Thrace’ in the television series ‘Battlestar Galactica’.

She has been nominated for various awards, and has also won a ‘Saturn Award’ (2006) for her role in ‘Battlestar Galactica’.

As of December 2022, Katee Sackhoff’s net worth is roughly $4 Million.

What do you think about Katee Sackhoff’s net worth? Leave a comment below.