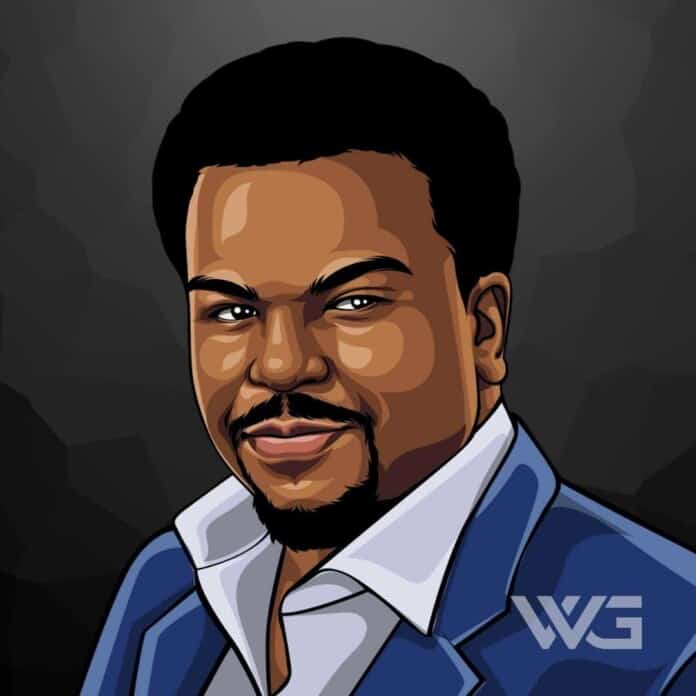 What is Craig Robinson’s net worth?

As of January 2023, Craig Robinson’s net worth is roughly $6 Million.

Craig Robinson is an American actor, comedian, musician, and singer from Chicago. Robinson is best known for his roles as Darryl Philbin on ‘The Office ‘and Doug Judy (the “Pontiac Bandit”) on ‘Brooklyn Nine-Nine’.

Craig Phillip Robinson was born on the 25th of October, 1971, in Chicago, Illinois. Robinson is the son of a music teacher mother and an attorney father.

Robinson began doing stand-up and taking classes in improv and acting at The Second City in Chicago while still in college. After doing open-mic sessions in New York, Chicago, Los Angeles and elsewhere and winning regional comedy competitions, he began to get spots on late-night TV shows like Jimmy Kimmel Live.

In 2010, he hosted season seven of Last Comic Standing with judges Greg Giraldo, Natasha Leggero, and Andy Kindler. He has appeared on other television shows, including ‘Brooklyn Nine-Nine’, ‘Lucky’, ‘Halfway Home’, and ‘Reno 911!’. He appeared in the music video for the Red Hot Chili Peppers song “Hump de Bump”.

He has also provided his voice for the films ‘Escape from Planet Earth’, ‘Percy Jackson: Sea of Monsters’ and ‘Henchmen’.

Here are some of the best highlights of Craig Robinson’s career:

“I think I said something mean when I was little, and my mother snapped on me. If I had cursed out my dad, I probably would be just waking up.” – Craig Robinson

“People do ask me for advice for some reason. And I’ll just kind of pose it back to them and let them answer on their own. I never like to give my advice ’cause I don’t want them to come back and ‘You were wrong! You ruined my life!’ so it’s more about ‘Hey, this is what you just told me. What does that sound like to you?” – Craig Robinson

“There’s a couple of movie parts that I can’t remember. There was always something kind of lurking because when ‘The Office’ started, I wasn’t a regular. You’re a guest star, so they don’t really need you. They didn’t say that, but I’ve seen the show – with or without me, it’s still funny.” – Craig Robinson

Now that you know all about Craig Robinson’s net worth, and how he achieved success; let’s take a look at some of the lessons we can learn from him:

True confidence is not about what you take from someone to restore yourself, but what you give back to your critics because they need it more than you do.

Choose battles that you can win without losing your heart and your soul.

How much is Craig Robinson worth?

Craig Robinson’s net worth is estimated to be $6 Million.

How old is Craig Robinson?

How tall is Craig Robinson?

As of January 2023, Craig Robinson’s net worth is estimated to be $6 Million.

What do you think about Craig Robinson’s net worth? Leave a comment below.