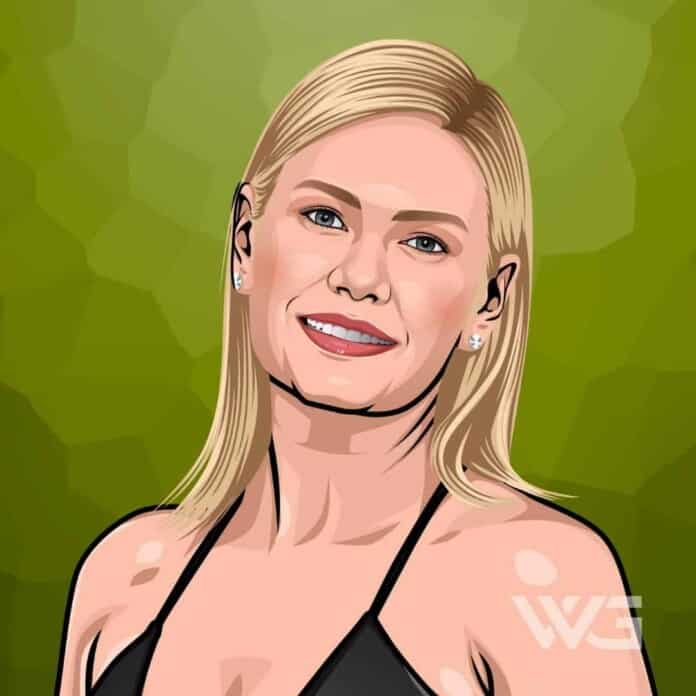 What is Elisha Cuthbert’s net worth?

Elisha Cuthbert is a Canadian actress and model.

Cuthbert made her first televised appearance as an extra in the horror-themed series for children ‘Are You Afraid of the Dark?’. She made her feature debut in 1997. Her major lead role came in the drama film ‘Airspeed (No Control) alongside Joe Mantegna.

In 2001, she starred in the movie ‘Lucky Girl,’ for which she received her first award, the Gemini Awards.

Elisha Ann Cuthbert Phaneuf was born on the 30th of November, 1982, in Calgary, Alberta.

Cuthbert is the daughter of Patricia and Kevin. She grew up in Greenfield Park. In 2000, she graduated from Centennial Regional High School and moved to Los Angeles at 17.

When Cuthbert was 9 years old, she started modeling children’s clothing and became a foot model. She made her first televised appearance as an extra in the horror-themed series for children, ‘Are You Afraid of the Dark?’.

Cuthbert has appeared in films such as ‘Love Actually,’ ‘Old School,’ and ‘The Girl Next Door.’ She was born in Calgary, Alberta, Canada. She started acting as a child in the teen series ‘Popular Mechanics for Kids’ and ‘Are You Afraid of the Dark?’ onto the grown-ups TV screen with her featured part on the hit FOX series ’24’.

Her “blonde next door” looks helped her to pursue a successful big-screen career as well. She landed smaller turns in features like ‘Old School’ and ‘Love Actually.’

She soon acquired leading roles in such movie projects as the romantic comedy ‘The Girl Next Door’ and the horror feature ‘House of Wax’ in 2005.

Even though Cuthbert has lost some of her attention with her reduced involvement with ’24’ and starring failures like the controversial thriller ‘Captivity,’ she revived her career with her appearance on the comedy ‘Happy Endings.’

She has been evolved from a beautiful young ingenue to a more mature performer. Cuthbert has continued to look for new challenges in both film and television.

How Does Elisha Cuthbert Spend Her Money?

Elisha Cuthbert spends some of her money on real estate and charity work.

Cuthbert lives in a home in Los Angeles, California. Cuthbert purchased the home in 2005. It comes with three bedrooms and two bathrooms.

Cuthbert has donated money to the Canadian Breast Cancer Foundation.

Here are some of the best highlights of Elisha Cuthbert’s career:

“When I was 20, I thought I was 30 – but I was so far from it. When you’re young, you want everything to happen now. As you mature, you can look back and see all the great things you achieved with time and patience.” – Elisha Cuthbert

“I don’t think anything can prepare you for a crew to come in and actually film you like yourself. It’s frightening to think that all of a sudden people are going to know how you are, and how you act on a day-to-day basis.” – Elisha Cuthbert

“I don’t like anything that’s too confining. I’m a control freak, so anything that makes me feel like I’m out of control is a bit uncomfortable. But you know how it is. Sometimes it’s good to live a little!” – Elisha Cuthbert

“I have lots of records, quite a collection, actually, that I stole from my mom. I have the original ‘Thriller’ album, and I have a really great ‘Elton John’s Greatest Hits,’ and I also have a N.E.R.D. album. Records sound more original. They have more edge.” – Elisha Cuthbert

“The pressure to be pretty? I set, you know, boundaries and goals for myself. I try not to compare myself to anyone else because I will never be anyone else except myself. So I try and stay true to me, and hopefully, the right projects will come my way.” – Elisha Cuthbert

Now that you know all about Elisa Cuthbert’s net worth and how she achieved success; let’s take a look at some of the lessons we can learn from her:

Life is funny, and it is interesting how we make it as serious as possible.

You are enough just as you are.

Our mission in life is not merely to survive but to thrive.

How much is Elisha Cuthbert worth?

Elisha Cuthbert’s net worth is estimated to be $20 Million.

How old is Elisha Cuthbert?

How tall is Elisha Cuthbert?

Elisha Cuthbert is a Canadian film and television actress.

Cuthbert is best known for her role in the hit series ’24’. Before she gained international fame, she was already well known in Canada as the co-host of ‘Popular Mechanics for Kids.

What do you think about Elisha Cuthbert’s net worth? Leave a comment below.

What is Sandra Lee's net worth?  Introduction  Sandra Lee is a...