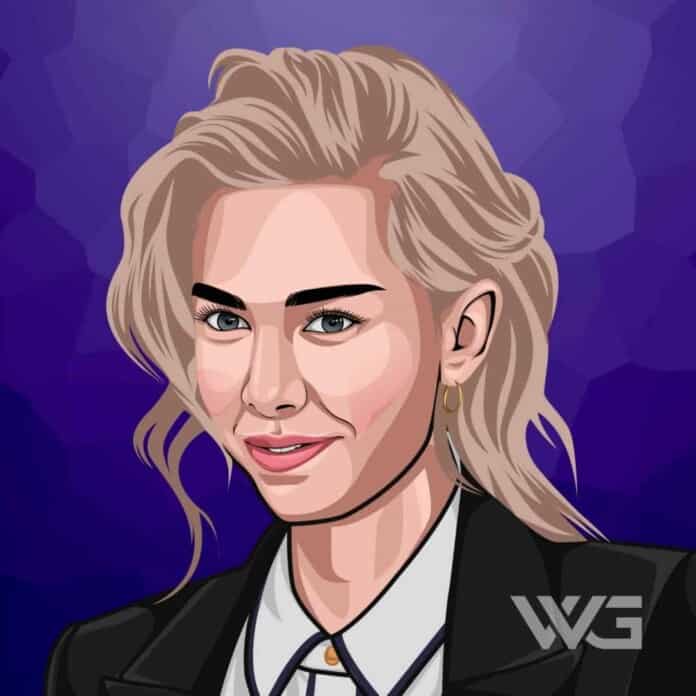 What is Vanessa Kirby’s net worth?

Vanessa Kirby is an English actress from London.

Kirby is best known for her role as Princess Margaret in the Netflix series ‘The Crown’, for which she won the British Academy Television Award for Best Supporting Actress and received a nomination for the Primetime Emmy Award for Outstanding Supporting Actress in a Drama Series.

Vanessa Kirby was born on the 18th of April, 1988, in Wimbledon, London. Her father is the popular urologist Roger Kirby and her mother is a former magazine editor.

She studied at Lady Eleanor Holles School, Hampton and decided to pursue theatre at Bristol Old Vic Theatre School. However, she was turned down.

In 2011, she was seen in the popular plays ‘The Acid Test’ and ‘Women Beware Women.’ The year also marked her TV debut with the series ‘The Hour’ as Ruth Elms.

Kirby played the role of Stella Kowalski in the adaptation of ‘A Streetcar Named Desire’ at the Young Vic in 2014. This was a huge hit. Later in the year, she appeared in the shorts ‘Insomniacs’, ‘Off the Page: Devil in the Details’, and ‘The Exchange.’ She was also seen in the drama ‘Queen & Country’.

In 2015, she landed several major and supporting roles. She was first seen in the role of Katharine Dunlevy in the sci-fi adventure ‘Jupiter Ascending’ and later as Sophie in ‘Bone in the Throat.’ She followed this up with roles in ‘Everest’ and ‘The Dresser.’

In 2019, she was seen in the David Leitch movie ‘Fast & Furious Presents: Hobbs & Shaw’, where she played the role of Hattie. The movie was a hit at the box office. Later in the year, she reprised the character of Ada Brooks in the drama thriller ‘Mr. Jones’, which was a critical hit.

Here are some of the best highlights of Vanessa Kirby’s career:

“I started to really enjoy the fact that [princess] Margaret was an exhibitionist. Even on a day-to-day basis, Margaret’s costumes were always so much more dramatic and bold than Elizabeth’s were.” – Vanessa Kirby

“I did a lot before [being cast] because I knew how important it would be for playing somebody really, or attempting to – to show the team [the role] was something I would be fascinated to do. I read a couple of biographies and I watched everything I could find [about princess Margaret].” – Vanessa Kirby

“Once you start [filming] you have researchers who are constantly giving you information. Ultimately it isn’t about impersonating or trying to be an image of somebody and more trying to capture the spirit and the soul of the person somehow.” – Vanessa Kirby

“I remember somebody saying something to me about Frost/Nixon when Anthony Hopkins does his famous speech, and the difference in the way Anthony did it was to dramatize, essentially, what was a documentary-style version of that speech. I remember someone saying to me, “There is artistic liberty.” – Vanessa Kirby

Now that you know all about Vanessa Kirby’s net worth, and how she achieved success; let’s take a look at some of the lessons we can learn from her:

1. Act The Way You Want To Be Treated

It seems everybody is experienced in giving advice, after all, we hear so much of it. But, we don’t know whether their experience is in giving bad advice; and this is determined by our own experience.

A failure is an event. A mere data point. You tried something. And it didn’t work out. But society makes it looks like a crime. The label of Failure that is pinned on you is far more burdensome than the act of failing itself.

How much is Vanessa Kirby worth?

Vanessa Kirby’s net worth is estimated to be $4 Million.

How old is Vanessa Kirby?

How tall is Vanessa Kirby?

Vanessa Kirby is an English stage, TV, and film actress. She has slowly made the move from screen to stage and made her TV and film debuts early in the 2010s. Her breakthrough came when she was cast as Princess Margaret in the popular series ‘The Crown.’

As of November 2022, Vanessa Kirby’s net worth is estimated to be roughly $4 Million.

What do you think about Vanessa Kirby’s net worth? Leave a comment below.