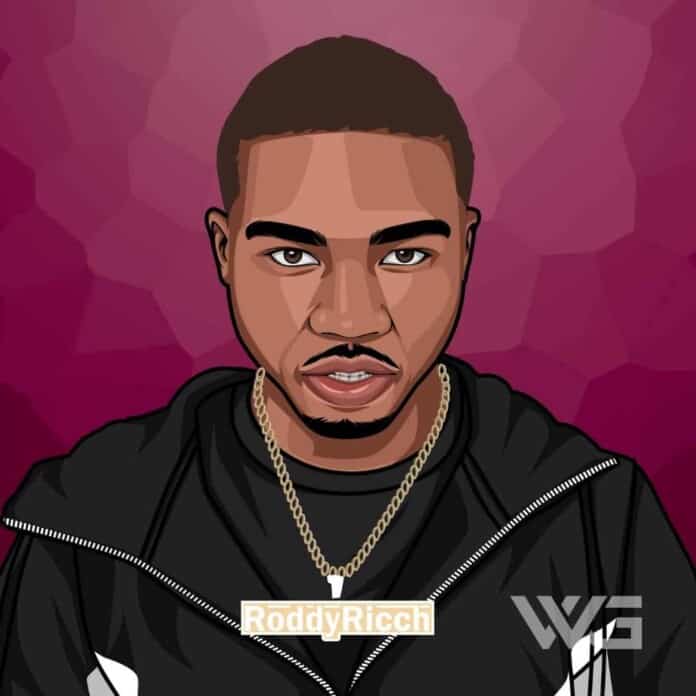 What is Roddy Ricch’s net worth?

Roddy Ricch is an American rapper, singer, songwriter, and record producer from California.

He is signed to Atlantic Records. In November 2018, he released the mixtape, ‘Feed Tha Streets II’, which has peaked at number 67 on the Billboard 200 chart.

Rodrick Wayne Moore, Jr. was born on the 22nd of October, 1998, in Compton, California. Growing up, he traveled to a lot of places along with his family. The trips later influenced his music.

Roddy was 8 when he began rapping. However, back then, he was not serious about music. His perspective toward music changed completely after he landed in jail for 2 weeks.

Roddy first got fame with his song ‘Ricch N***a,’ which he made while he was a teenager. However, following this, he turned to the streets and took a break from music.

In 2018, Roddy dropped an EP titled ‘Be 4 Tha Fame.’ Following this, he gifted his fans the single ‘Die Young,’ produced by London on da Track. The rapper had written the song on the night rapper XXXTentacion died.

In May 2018, Roddy attended the ‘PowerHouse’ concert in Los Angeles as a guest of Nipsey Hussle, the legendary Compton rapper who was shot dead in March 2019.

Roddy was introduced to Nipsey by A&R Keefa Black. Over time, Roddy built his friendship with Keefa, and through his connections, he grew closer to Nipsey, too. Roddy and Nipsey later collaborated for the track ‘Racks in the Middle,’ which reached number 26 on the ‘Billboard Hot 100.’

In October 2018, Roddy’s fans speculated a collaboration with Meek Mill after the latter invited Roddy at a ‘PowerHouse’ concert in Philadelphia and gifted him a ‘Dreamchasers’ chain, ‘Dreamchasers’ being Mill’s record label imprint.

Here are some of the best highlights of Roddy Ricch’s career:

“A lot more death in the streets. Growing up, getting older, friends getting lost to prison. You tend to want to do something that’ll help you make it out of that.” – Roddy Ricch

“I dibbled and dabbled but I didn’t think rap made money like that, to be honest. I wasn’t in it for the money. I thought it was part of the act. I had never met a rapper. I don’t believe in things that I can’t see.” – Roddy Ricch

“Even though that’s where I’m from and that’s where I’m at. I was also traveling a lot when I grew up. My first trip somewhere out the state was Chicago and it just went on from there.” – Roddy Ricch

“Sometimes it was family. My great-grandma is still alive; she’s from Louisiana so I spent time there. I got family in Atlanta, Mississippi, New York, all over the place. Sometimes I’d be out there trying to make something happen.” – Roddy Ricch

“Nobody from my projects, though. You got Kendrick Lamar but he’s more on the Westside, as in by Centennial [High School]. You might not understand if you’re not from here. YG is from another side. I met Kendrick when I was younger but he’s not really the flashy type. You’d never know if he had a dollar or a million dollars.” – Roddy Ricch

Now that you know all about Roddy Ricch’s net worth, and how he achieved success; let’s take a look at some of the lessons we can learn from him:

Failure is only an opportunity to try again.

Don’t dish out what you can’t take in return.

The only change you can bring is in you; what precedes, is a reaction to it so stop pretending and start working.

How much is Roddy Ricch worth?

Roddy Ricch’s net worth is estimated to be $20 Million.

How old is Roddy Ricch?

How tall is Roddy Ricch?

Roddy Ricch is an American rapper, singer, songwriter, and record producer who has worked with some of the best rappers in the industry. Many of his tracks has peaked the Billboards.

What do you think about Roddy Ricch’s net worth? Leave a comment below.